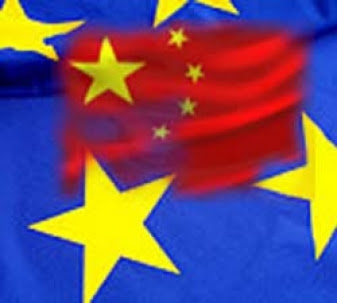 Two articles points to the same threat: the economic power of China.
In India first: a top nuclear scientist expressed concern over India's private sector placing large-scale orders to import power plant equipment from China. He said that it is 'disturbing'.
Mr. MR Srinivasan, former Atomic Energy Commission Chairman and Secretary, Department of Atomic Energy explained: "When Chinese Prime Minister came (to India recently), something like 30,000 mw to 40,000 mw of power plants have been ordered from China by the Indian private sector. It's a disturbing thing".
He pointed out that India actually started making power plant equipment before China but China has grown in the field rapidly driven by the state and it has so much capacity now that it can take big orders and "beat everybody in competition".
"We don't want to electrify this country based on Chinese equipment", he said, adding, this issue is worth pondering.
Then in Europe, voices are asking some sort of regulation to monitor the Chinese economic take-overs.
Despite the so-called 'Peaceful Rise of China', these threat perceptions are bound to grow during the coming year.

EU industry chief voices need to block Chinese takeovers
ANDREW WILLIS
EUOBSERVER / BRUSSELS - Europe should establish a new authority with powers to block foreign takeovers of strategic European businesses, EU industry commissioner Antonio Tajani has argued.
The authority is particularly necessary as Chinese companies increasingly look to grow their overseas investments, the Italian politician said in an interview with German business daily Handelsblatt on Monday (27 December).
"Chinese companies have the means to buy more and more European enterprises with key technologies in important sectors," remarked Mr Tajani.
"It is a question of investments but behind that there is also a strategic policy, to which Europe should respond politically," he said.
As a result, Europe should establish "an authority tasked with examining foreign investments in Europe" using the the Committee on Foreign Investment in the US as a model.
Under the proposal, the European authority would determine "if the acquisition (of a company) with European know-how by a private or public foreign company represented a danger or not."
A number of European and American firms have been frustrated in recent years by the speed at which their Chinese competitors have acquired new technologies developed outside the Middle Kingdom.
For its part, China has gradually sought to remove its own restrictions on foreign investment but considerable limitations still apply.
Reacting to the EU suggestion for a new authority, German economy minister Rainer Bruederle warned against overly quick decisions.
"Of course one can have an evaluation procedure taking into account security and public order concerns. But we shouldn't take hasty actions," Mr Bruederle told the Handelsblatt paper on Tuesday.
"Europe profits from the openness of its markets and offers attractive conditions for foreign investors," he added.
Posted by Claude Arpi at 7:38 AM