The Beginning of a New START 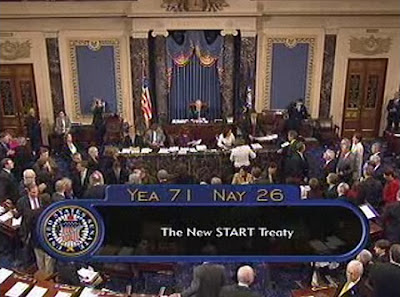 Great news for Christmas. The US Senate has ratified the Strategic Arms Reduction Treaty with Russia.
I happened to be attending a Seminar on Disarmament in Mumbai. During the previous days, participants raised doubts: will the Republican-dominated Senate agree to follow President Obama in this small, but significant step. They finally did. A nice Christmas present for humanity.

Senate Approval of New START Moves Nuclear Arms Control Forward
Hans Kristensen
Federation of American Scientists
The Federation of American Scientists today applauded the Senate’s ratification of the New START (Strategic Arms Reduction Treaty) between the United States and Russia.
The Senate voted 71 to 26 in favor of ratification of the treaty.
The approval of the treaty is a victory for common sense and an impressive achievement for the Obama administration in overcoming stubborn opposition from Cold Warriors to modest nuclear arms reductions.
New START does not require destruction of a single nuclear warhead, but it reduces the limit for how many of them can be deployed on long-range ballistic missiles and heavy bombers.
The United States and Russia possess more than 90 percent of the world’s nuclear weapons and will continue to do so when the treaty limit is reached seven years from now.
During the past year and in an effort to ensure Congressional support for New START, the administration has committed to significant increases in spending on modernizing nuclear weapons and the production complex over the next decade: well over $100 billion for modernization of missiles and bombers, and more than $85 billion for modernizing warheads and production facilities.
This modernization will have to be balanced against the other important goal of U.S. nuclear policy: securing international support for strengthening non-proliferation of nuclear weapons and materials. Demonstrating clear intentions to reducing the number and role of nuclear weapons will be essential to winning support for this agenda.
Despite its limitations, the approval of the New START treaty brings U.S-Russian strategic relations back on track, reestablishes a vital on-site inspection regime, and potentially opens the way for negotiations on additional reductions in the future.
Those negotiations must establish limits on and verification of U.S. and Russian non-deployed and non-strategic nuclear weapons, and prepare the ground for broadening nuclear arms control to the other nuclear weapons states.
Posted by Claude Arpi at 7:24 AM