On the Irrawaddy also 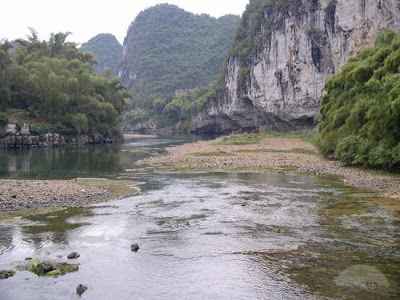 It is not only happening to India with the series of dams built by China on the Yarlung Tsangpo (Brahmaputra), but to Burma too with dams on the Irrawaddy.
According to the NGO, International Rivers: "The report 'High and Dry' by the Shan Sapawa Environmental Organisation and the Shan Women's Action Network (SWAN), exposes how local trade and transport across the Shweli River (the Burmese name for the Longjiang) near Muse and Namkham has been crippled by unpredictable daily fluctuations in the water level since the completion of the 110-meter tall Longjiang Dam about 30 kilometers upstream in mid-2010. An estimated 16,000 villagers relying on ferrying of goods near Muse, the main China-Burma border trade crossing, have seen their income cut drastically by the continual drops and surges in the water level, which have caused both grounding and flooding of the ferry boats."


Burma Activists Say China's Dam Harms Economy Downriver
Voice of America
Daniel Schearf
Bangkok
14 December 2010
A group of Burma activists say a dam in China has dropped the water level of an eastern tributary to Burma's Irrawaddy River to a historic low, making water flows erratic and damaging the economy in the area. China has been criticized before for not sharing enough information on its upstream dams.
The Shan Sapawa Environmental Organization and the Shan Women's Action Network on Tuesday released a report that blames China's Longjiang River dam for dramatic drops in water levels.
It says since the hydropower dam began operating in July, in some places the river has fallen to a third its normal width and was only knee deep.
Villagers quoted in the report said water levels can drop sharply and within only half an hour, leaving boats aground mid-stream.
The shallow water has grounded river ferries, slowing trade that about 16,000 villagers depend on for their livelihood.
Nang Charm Tong is with the Shan Women's Action Network based in Chiang Mai, Thailand. She says some villagers have seen their incomes drop by as much as half.
"The villagers were never, you know, informed or consulted about these planned dams of the Longjiang. And, they were also given no warning of the fluctuation of the water levels," she said. "They have relied on the river for their whole life. And now, it has become very unpredictable and they don't know how to maintain their livelihood."
The Longjiang River crosses from southwestern China's Yunnan province into eastern Burma's Shan state, where it is known as the Nam Mao. It then flows into Burma's main river, the Irrawaddy.
The activists are calling on China to establish a more natural flow of water from the dam to minimize the effect on villagers and the environment downstream.
China also plans to build about 13 dams on the Nu River, known as the Salween when it crosses into Burma.
Sai Sai, a spokesman for the Shan Sapawa Environmental Organization, says China needs to consider the health of the rivers it shares with neighbors and all the communities that rely on them.
"It is the very important for the China or for the dam that is built upstream to look at for the whole length of the rivers," he said. "Because the river ecosystem is the connected together so it is impossible to be or it doesn't make sense that the assessment it just stop at the boundary and [China needs to survey] need to do the whole rivers."
China has been criticized in the past for failing to share information on its dams, including on the Lancang River, known as the Mekong in Southeast Asia.
Record low water levels this year on the Mekong led many to blame China.
Cambodia, Thailand, and Laos also are looking into building dams on the Mekong and have also come under criticism from environmental groups, which say the dams could harm the ecosystem and villagers.
Posted by Claude Arpi at 7:04 AM