More on the Metok Road 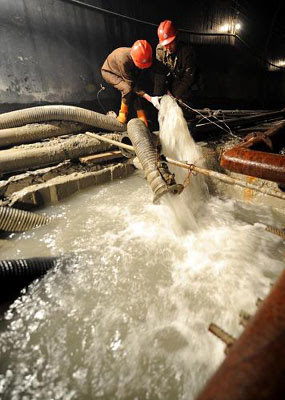 As Chinese Premier Wen Jiabao arrived in India for important talks with his Indian counterpart, the Chinese TV (CCTV) showed several programs on the new tunnel (and road) reaching the most remote area of Southern Tibet, Metok (or Motuo with Chinese pronunciation). Metok is located a few kilometers north of the McMahon Line which separates India from China.
As mentioned earlier on this blog, this new development, most ignored by the 'breaking the news' channels will have incalculable consequences for the defense of Arunachal Pradesh as well as the flow of the Brahmaputra.

Highway opens door to Motuo County
2010-12-22 14:38:00 | by: | From: CCTV
Over the past four decades, people in and around Motuo have been battling poor road conditions. Now let's find out a little more about the smallest county in China, and the project that is about to link it with the outside world.
Located in the southeastern part of Tibet, the 117 kilometer-long Motuo highway will link Motuo County and Bomi county. Construction on the 950 million yuan-budget project started in April, last year and is estimated to finish in 2012.
It will consist of two parts, the newly constructed Ga-long-la Tunnel and the rebuilt section.
The Ga-long-la tunnel is the key sector of the project. Once completed, it will be over 3.3 kilometers long, cutting 24 kilometers from the original rugged mountain road. Meanwhile, 29 bridges and 227 culverts will be constructed in the rebuilt section.
The Highway negotiates the complicated terrain of the Grand Yalunzangpo Gorge. The drop between the highest and the lowest point is over 3100 meters. People have to cross more than 6 rivers before approaching Motuo County.
The environment along the Motuo highway consists of a rare combination of glaciers and wetlands. And various environmental protection considerations feature throughout the project.
Due to the poor geological conditions, none of the roads linking Motuo county to the outside world are safe and convenient. It has made Motuo an "isolated island" in the Tibet Autonomous region. But the highway will provide a gateway for the county and its people to explore the outside world.

Impossible route to isolated island
2010-12-22 14:10:00 | by: | From: CCTV
Due to difficult natural conditions, building a highway connecting Motuo County with the outside world was once considered impossible. But with the Galongla Tunnel now creating a passage through the mountain, the dream is coming true. Zhou Xiran explains past transportation hardships, and why the building of this road is so crucial.
Motuo is considered the "last mysterious land on earth."
There have historically been two main access points entering this county. The first route has travelers start in Pomi County, tramp over two mountains that rise higher than 4-thousand meters, and cross a forest full of leeches, poisonous insects, and wild animals. This course is also teeming with the risks of avalanches, downpours, and landslides.
Another traditional path is scaling snow-covered Duoxiongla Mountain, which reaches as high as 42-hundred meters, sliding through a cable over the Yarlung Tsangpo River, and walking through the towns of Lage, Hanmi, and Beibeng. Only then could a wayfarer enter this Tibetan paradise.
The trip would last four days, and the route is only available for a limited period of time -- from June through October -- if that long.
From June to September, abundant rainfall causes this road to break up every year. From November to June, the Galongla and Duoxiongla mountains are usually blocked by thick snow.
With poor transportation options, goods moving into the county could be only carried by human beings or livestock, especially during the winter season, when the area is blocked by heavy snow on the mountains, making Motuo an "isolated island."
Cargo transporter Xu Xinggui said, "Each year, we carry goods 120 or 130 times, on average."
The limited amount of goods has given Motuo County the highest consumer prices in China ... Just imagine paying 10 yuan for a bottle of Coca-Cola, or 20 yuan for a bottle of beer.
Motuo County vendor Li Ziaoyu said, "Lean meat is 40 yuan per kilogram, and fat meat is 36 yuan per kilo. That's much more expensive than other parts of China."
Bu Qiong, quality control engineer of Armed Police Traffic Team, said, "Motuo is an isolated island on this plateau, as well as the only county in China with no vehicle access. The people of Motuo desire lots of goods, and they have to carry them on their shoulders from outside ... walking."
The county's only hospital lacks medical equipment and expertise, and people can only purchase medicines once a year, when the routes are able to be passed.
Deng Shenmin, deputy director of Motuo County People's Hospital, said, "After the Galongla Tunnel creates a pass through the mountain, the sickest patients can be transferred outside, and it will be easier to get medicines. We're planning to enlarge our hospital and improve service for the patients."
Likewise, the county's only post office and bank are operating seasonally. During the snowy season, when mountains are blocked, the arrivals of letters and telegrams are delayed, and banking networks are cut off. Local residents normally read newspapers several months later, and immediate remittances actually take 3 days.
Jian Ada, director of Motuo County Post Office,said, "After the Motuo Highway is built, mail, magazines, and letters will be delivered to local departments without delay."
As the Galongla Tunnel is cut through the mountain, it will be not only free access for goods flow... changing local people's basic life condition ... but also bring in knowledge, culture, and technologies -- helping to build a better Motuo County.
Posted by Claude Arpi at 8:38 AM