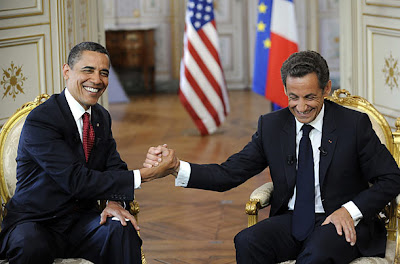 As President Sarkozy arrives in India, I am posting some comments on 'Sarko The American' (as Le Monde called him) from the US cables 'declassified' by Wikileaks. Of course, it is viewed from an American angle.


January 24, 2008
PRESIDENT SARKOZY ARTICULATES HIS FRAMEWORK FOR FRENCH FOREIGN POLICY
Summary
In this annual New Year's message to the Diplomatic Corps on delivered on January 18, President Sarkozy laid out a theoretical justification for recasting France's role on the international scene in the twin challenges before the international community: climate change and the "return of the religious extremism" as a factor in international politics. Sarkozy called for "four innovations" to prevail over these challenges: 1) returning France to the "heart of the occidental family," 2) dedicating France to a "diplomacy of reconciliation," 3) affirming "diversity" while demanding "its corollary, reciprocity," and 4) working towards the "construction of a world order adapted to the emergence of new powers and therefore capable of dealing effectively with the challenges of the 21st century." The specific initiatives Sarkozy said France would be pursuing during the coming year -- from reform of the UNSC to pressing for continued sanctions against Iran, from expansion of the G-8 to the hosting of an Afghanistan donors' conference -- all link to Sarkozy's projected role for France as leading the way towards the international unity needed to meet the environmental challenge to humanity from global warming and the political challenge to secular democracy from religious fundamentalists. END SUMMARY.

May 19, 2008
FOR THE PRESIDENT FROM AMBASSADOR STAPLETON
Summary
Mr. President, you will arrive in France as Nicolas Sarkozy begins the second year of a five-year term as President. You will meet a Sarkozy chastened by the experience of a first year marked by a sharp drop in his political stock at home, but during which he nevertheless reclaimed French leadership in Europe and moved France closer to the U.S. Sarkozy was elected in May 2007 on a platform of fundamental domestic reform, promising to unleash France’s economic potential and to adapt the country to globalization.  He has undertaken a range of domestic reforms but the results have been somewhat disappointing -- to supporters who advocated more daring implementation of a more ambitious set of measures, and to a public that expected an immediate positive impact in household purchasing power. Though the public by and large continues to support Sarkozy’s reform effort, his personal popularity has plummeted, mostly as a result of his “unpresidential” parading of his personal life and his weakness for glitz -- an image he is now seeking to repair.
2. (C) Sarkozy was not elected on a foreign policy platform, but this is where he has thus far left his clearest mark, repositioning France to work alongside the U.S. to meet common challenges and leading Europe to its next institutional advance in the form of the Lisbon Treaty. While stressing France’s independence of action, Sarkozy has sought to enlarge French influence by working constructively with the U.S., setting aside France’s Gaullist vocation of tempering the United States’ “hegemonic” position in world affairs. This “repositioning” (Sarkozy’s term) vis-a- vis the U.S. is seen most clearly in Sarkozy’s articulation of the stakes for France, NATO and the West in Afghanistan, his commitment of more troops to NATO’s stabilization efforts there, and his declared intention to re-join NATO’s integrated military command structure in the context of an invigorated European effort on defense. Your visit provides an opportunity to support and give further impetus to Sarkozy’s refashioning of the U.S.-French relationship, and to demonstrate to the French public that Sarkozy was right in positing that a closer relationship with us increases France’s influence without undermining its independence. A discussion of France’s approach to key international issues closes out this message. END SUMMARY.

2009, March 20
FOR THE PRESIDENT FROM CHARGE D’AFFAIRES MARK PEKALA
Key points:
-- Your visit comes at a historic time. Nicolas Sarkozy is the most pro-American French President since World War II and is, at the moment, arguably the most influential leader in Europe. Sarkozy’s goodwill and your prestige give us an unprecedented opportunity to cement the positive changes he has already made and to strengthen the relationship for years to come.
-- Sarkozy is unquestionably the driving force in all of French foreign and domestic policy. A pragmatist and an activist, he can be brilliant, impatient, undiplomatic, hard to predict, charming, innovative, and summit-prone. He strongly believes that it takes political leaders to slice through the &Gordian knots8 that bureaucracies can often be unable to resolve. He has no qualms about jettisoning policies that, from his perspective, have outlived their usefulness.
-- Your personal rapport with Sarkozy will be a factor in the overall relationship, and he is eager for a genuine friendship in addition to a working relationship. He was disappointed not to have been the first EU leader invited to Washington.
-- Expect Sarkozy to pitch big ideas on everything from the financial crisis to the Middle East peace process. In turn, he will respond well to your bold, inventive proposals.
-- Sarkozy should get a clear sense of your priorities and, as appropriate, red lines. Sarkozy wants to get off on the right foot with you and will respect your goals.
End key points.

2009, December 04
FOR THE SECRETARY FROM AMBASSADOR RIVKIN
Summary. At the mid-point of his five-year term, French President Sarkozy continues to be the dominant, virtually unchallenged, political force in France. Slowed in domestic reform efforts by entrenched interests and the world-wide financial crisis, Sarkozy is increasingly focused on successfully leveraging France’s foreign policy influence on the global stage. Ambitious and action-oriented, Sarkozy doesn’t hesitate to break traditional French policies and reach out to new partners, from Saudi Arabia and Syria to India and Brazil. His impatience for results and desire to seize the initiative -- with or without the support of international partners and his own advisors -- challenges us to channel his impulsive proposals into constructive directions with an eye to long-term results. Sarkozy himself is firmly convinced of the need for a strong transatlantic partnership and he has long desired to be THE major partner to the U.S. in Europe, whether on climate change and non-proliferation or Iran and the Middle East. Our effort to secure increased French contributions in Afghanistan offers an interesting perspective on the centralization of key decision-making powers in the French President and how to best work with Sarkozy as a valued, and valuable, partner. With high-profile events like the Non-Proliferation Treaty (NPT) prep-com next spring, and Sarkozy preparing to lead France’s chairmanship of the G-8/G-20 in 2011, we believe we can best secure our interests across a broad front through continued close consultations with our French partners (including, and perhaps especially, at the highest levels), with an eye to leveraging Sarkozy’s strong political standing, desire for action, and willingness to make difficult decisions into force multipliers for our foreign policy interests. End Summary.

NO ONE TO SAY “NO”
¶7. (C/NF) Sarkozy has few restraints -- political, personal or ideological -- to act as a brake on his global ambitions. Domestically, he rewards party leaders prepared to adopt his policies and marginalizes any opponents with a diverse view. Several “favored” cabinet ministers with high profiles early in his administration -- including Rama Yade and Rachida Dati -- were subsequently bumped into secondary jobs after having disagreed with Sarkozy. On the other hand, State Secretary for European Affairs, Pierre Lellouche, willingly muzzled his long-term outspoken support for Turkish Accession to the EU in exchange for his current post. While Diplomatic Advisor (NSA-equivalent) Jean-David Levitte remains a key player, with an extensive background in diplomacy and a calming personality, other advisors like Secretary General Claude Gueant are playing an increasingly public role. Despite having Sarkozy’s ear to various degrees, few appear to exercise any significant degree of influence over the activist president.
¶8. (C/NF) Sarkozy’s own advisors likewise demonstrate little independence and appear to have little effect on curbing the hyperactive president, even when he is at his most mercurial. Elysee contacts have reported to us the great lengths they will go to avoid disagreeing with him or provoking his displeasure -- even recently reportedly re-routing the President’s plane to avoid his seeing the Eiffel Tower lit up in Turkey’s colors on the visit of PM Erdogan (a decision made by the Paris city hall). After two years in office, many seasoned key Elysee staff are leaving for prestigious onward assignments as a reward for their hard work, raising questions as to whether new faces will be any more willing to point out when the emperor is less than fully dressed.
Posted by Claude Arpi at 8:24 AM

Domestically, he rewards party leaders prepared to adopt his policies and marginalizes any opponents with a diverse view. Several “favored” cabinet ministers with high profiles early in his administration. This is very very good side I like it so much Thanks MA 03327043387