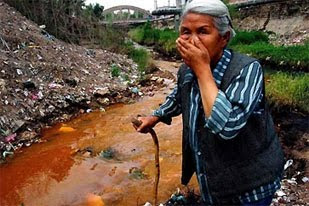 Environment Minister Jairam Ramesh said: "The Union government is confident of getting the holy Ganga river cleaned by 2020. Rs 15,000 crore will be spent for this purpose under the river development fund". Delhi plans to save the river by making it nirmal (clean) and aviral (free flowing): "We will not only ensure 'aviral dhara' (continuous flow of the river stream), as being demanded by several NGOs, but also ensure nirmal dhara (clean and pollution free flow).
Why should the taxpayers pay for cleaning the Ganga, they have already paid several times in the past and the polluters have continued to pollute. Polluters should be booked and made to pay.
Ditto for China.
This is one of the reasons why the West can't be economically competitive (at least compared to China). Industrialists are not allowed to pour their waste in the rivers or lakes or they pay a very heavy price.


China oil spill threatens Yellow River
BEIJING, Jan. 4 (UPI) -- A diesel spill from a ruptured pipeline operated by state-owned China National Petroleum
Corp. has seriously contaminated two Yellow River tributaries.
Contamination to the Yellow River remained under control and its water quality was still within the state standard, officials said at a news conference Monday, state-owned Xinhua news agency reports. Yet there were other news reports Monday that the fuel had already reached the Yellow River, a source of water for about 140 million people.
According to CNPC, China's largest oil company, construction by third-party workers caused a rupture Dec. 30 in a section of pipeline in a Shaanxi city along the Wei River. Xinhua reported Saturday the amount of oil leaked was about 40,000 gallons.
The pipeline transports oil from northwest China to central parts of the country.
"The work on managing the pollution has shifted downstream and the frontline of this battle has been extended. The situation remains serious," CNPC President Jiang Jiemin said Monday in a statement.
CNPC said more than 700 workers have been deployed for cleanup operations and to prevent the leak from spreading.
Over the weekend workers laid 17 floating dams across the Wei River to contain the leakage, and specialized chemicals were being spread to solidify the fuel and speed cleanup, according to a news release from the environmental protection bureau in the city of Weihai where the leak occurred.
CNPC had completed laying the first barrier across the Yellow River and had begun laying down a second and third barrier, state-controlled CCTV said Monday.
CNPC "took responsibility and are doing their best to contain the spill," Gordon Kwan, head of regional energy research at Mirae Asset Securities in Hong Kong, told Bloomberg. "The fact that it gets reported shows that the company is willing to become more transparent over environmental issues."
But the government has not said why the leak was not reported until Saturday.
"It's very tragic," says Wen Bo, China co-director for environmental group Pacific Environment, told Time Magazine. "It's more evidence that the oil companies are not prepared for such an ecological crisis."
The disaster mirrors a 2005 chemical spill in the Songhua River in which the water supply for more than 3 million people was temporarily cut off
Posted by Claude Arpi at 12:02 PM