The Three Evils and Promotion 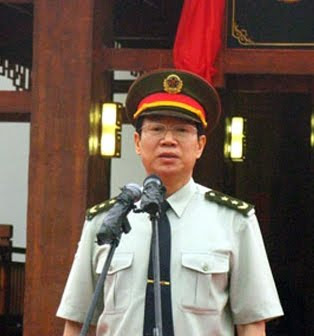 An important factor which will play a crucial role in the internal situation in China in 2010 is the power struggle within the Party between the ‘clique’ of President Hu Jintao and the ‘princelings’ (offspring of high-ranking Party officials) of Vice-President Xi Jinping. The struggle is visible even in Defence posting. The Straits Times stated that after the ‘princeling politicians’ , the PLA has now ‘princeling generals’.
The South China Morning Post reported that General Zhang Haiyang, son of General Zhang Zhen, a former Vice-Chariman of the Central Military Commission under President Jiang Zemin has become political commissar of the Second Artillery Corps, which controls China’s nuclear and conventional strategic missiles. His promotion comes five months after he became full general.
The interesting part of the story is that General Zhang was earlier in charge of Tibet. He served as political commissar of the Chengdu military region and was responsible of the Sichuan earthquake’s relief in May 2008, as well as for crackdowns carried out to curb rioting in Tibet in March/April.
Commander-in-Chief Hu Jintao has also offered plump postings to some of his favorites. Hu wants to make sure that officers in key posts are loyal to him and the Communist Youth League faction, today, the dominant clique in the CCP.
Since the October 1, a large number of senior appointments in the People’s Liberation Army (PLA) and the paramilitary People’s Armed Police (PAP) have been announced.
The China Brief of The Jamestown Institute pointed out: “Given the party’s reliance on the PAP to crack down on “the three evil forces of separatism, terrorism and religious extremism” across the nation, high-level personnel changes at the PAP deserve special attention. In late December, Lieutenant General Wang Jianping was appointed PAP Commander. The 56-year-old General Wang replaced General Wu Shuangzhan, 64, who is retiring after having served a record ten years as head of the paramilitary force. Wang and about two dozen officers were promoted in what the Chinese media described as one of the largest-ever reshuffles since the PAP was set up in 1983.”
General Wang is one of Hu’s favorite. The new rising star was elevated twice in 2009 — from PAP chief of staff to Vice-Commander, and now Commander. But oh! surprise, he also served as Commander of the Tibet Autonomous Region (TAR) PAP from 1996 to 2000 when Hu was Party Boss on the Roof of the Word.
Pema Thinley the new Governor of Tibet has also served in the PLA in Tibet.
The bosses in Beijing are not ready to take any risk and Tibet has become the best school to fight the three ‘evil forces’. 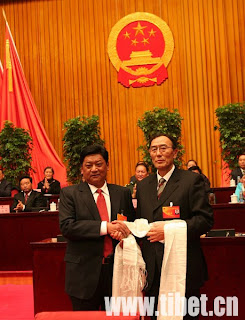 New Man Same Chair
Phayul.com
January 16, 2010
By Bhuchung D. Sonam
Pema Thinley's (also called Padma Choling) appointment as a governor of the so-called Tibet Autonomous Region (TAR) under China is widely reported by Reuters, BBC, The Strait’s Times and many other news media around the world.
However, for Tibetans, inside Tibet and in exile, the news came as just another regimented official exchange of position in a carefully manufactured show. Jampa Phuntsok (Chin. Qiangba Puncog), Pema Thinley and others who apparently hold high positions are mascots to show the world that Tibetans are fairly represented and happy in the Motherland. But in fact, they mostly do the barking when Beijing raises a stick and wag their tails when Beijing shows a bowl of chicken noodles.
The real decision-making power in Tibet is held by Zhang Qingli, a Chinese and the local Party boss. Zhang is a hardliner, who became infamous for calling His Holiness the Dalai Lama “a wolf in monk’s clothes, a devil with a human face."
Jampa Phuntsok, 62-years-old former governor, is “three years shy of China's mandatory retirement age for provincial governors,” and has held the position for six years since May 2003. His replacement Thinley is 58 and has served for 17 years in the People's Liberation Army (PLA).
Though Beijing is mute on the replacement, it clearly indicates that Tibet ranks very high in China's priorities. Hu Jintao, the current Chinese president, who served as the Party Secretary in Tibet and declared martial law there in 1989, senses the usefulness of a man with a military background.
In the light of massive peaceful protests throughout Tibet in 2008, and Beijing's brutal crackdowns due to which over 200 lives were lost, an appointment of a former PLA does not augur well for Tibetans. This is a subtle way of saying — dissenters will be dealt even more harshly.
The appointment may also have to do with the recent Politburo's meeting on Tibet chaired by Hu Jintao, during which, according to 9 Jan. 2010, Tibet Daily, they reviewed issues regarding economic development and long-term stability in Tibet. In fact, this has been the basis of Chinese policy towards the minority for a long time — "that increased wealth brings increased social order and allegiance to the source of that wealth" i.e. the Communist Party of China.
However, according to some other sources, Politburo also discussed putting more restrictions on religion such as furthering the on-going mandatory registration of religious institutions and monks and nuns. Religion forms the social backbone for Tibetan people.
Economic growth is, at least, what the new governor promises.
According to The Hindu newspaper, Thinley said “[that] Tibet would target 12 percent GDP growth this year, and increase spending on sectors involving people’s livelihoods. The net per capita income of farmers and herders is expected to top 4,000 yuan.”
Yet China’s promises about economic growth and massive investment in Tibet are mirages for ordinary Tibetans.
A recent arrival from Tibet, who does not want his name mentioned for fear of reprisal when he goes back to Tibet, said that the investment and contracts go to the Party cadres, their family members and those with connections or Guan Xi. “Ordinary people like us get nothing. Absolutely nothing,” he said.
Gongmeng Law Research Centre or Open Constitution Initiative’s report on the root causes of 2008 large-scale protests in Tibet testifies the above statement. The groundbreaking report said that a “'deep-rooted' local power elite networks have formed in many Tibetan areas, where it has become routine for the local authorities to be rent-seekers and for the administration to be inefficient." Under the Neo-Leninist system, a new class has formed, who are intimately linked with the local Party elites and other vested interest groups. The sole aim of this unholy union is ‘to get rich by’ grabbing the money meant for the poor.
Thinley's claim about “net per capita income of farmers and herders is expected to top 4,000 yuan (which is roughly $750)” in the next year is dismal. It is not much better than East Timor's $500, which is one of the lowest per capita incomes in the world.
Thinley was also quoted saying that “stability is of overwhelming importance,” and that “[they] will firmly oppose all attempts at secession,” a clear indication that the new man is up to the job to crush dissents against the Party's rule.
China is excessively obsessed with Tibet and is willing to go to any extent to avoid another massive popular people’s protest. However, the fundamental question that Beijing fails to understand is that negotiation — and not suppression — will solve this vexed issue. Appointing someone with a military background as a governor of Tibet will only deepen the chasm between Tibetan people and Beijing.