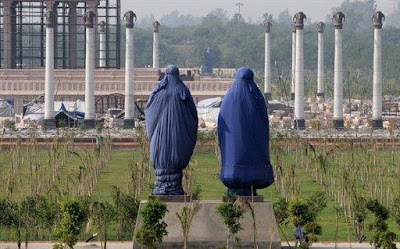 A few years ago, when I wrote an article about the 10 things I hate about India, I was criticized by many, while others agreed. Getting older, many more things are irritating me. I have listed 10 of them.
Having completed 35 years in this country, I however realize how much I love this incredible India, the following irritants notwithstanding.

1 Statues
Though it is difficult to decide on an order in the list of irritants, if I had to list one first, I would say, the statues exasperate me most.
Today in India, we witness a statuemania.
Parties, politicians and other self-styled leaders, all want to erect a statue of their own ‘leader’ (I will not speak of those who erect statues of themselves, the Supreme Court can deal with them).
Once a statue is erected, the departed (or living) statuefied leader has to be garlanded periodically; for the rest of the time, the statue is forgotten, except if, for any reason, the statue needs to be removed. Then you are sure to get a riot the next day. The ‘erecter’ group is always ready to give his/her life for his/her ‘leader’. As a result, the number of statues will only increase in the already congested streets of India.
Another problem with the statues is that they are usually ugly. When you look at ancient statues of Buddha of the Gupta or Gandhara periods, at certain Greek statues or some of Michelangelo’s works, you usually experience a deep aesthetic emotion. It is not the case with the present-day statues of political leaders.
A sage who was ‘deified’ by his disciples told them: “why do you like so much to deify me, why don’t you emulate me instead”. He added that “changing your nature is more important than worshipping me”.
But true, it is easier to garland a statue than to change oneself and become a better human being.

2 Lal Batis
I deeply dislike the red light gyrating on the top of the cars of ‘important’ officials. Why is it so important to show that one is ‘important’?
India must be the country in the world with the highest percentage of ‘important’ people. I personally believe that someone ‘importance’ should be calculated by the service that this individual offers to his country and to society, not by the lal bati (or the siren) on his vehicle.
Like in many domains, these things have a tendency to become worse. At the time of independence, the bureaucracy used to be called the Indian Civil Service. Though Nehru in his Discovery of India said that the service was "neither Indian, nor civil, nor a service", at least it carried the word ‘civil’. Then it became the Indian Administrative Service, an institution whose job was only to serve the administration and the government. The ‘civil servants’ became ‘government servants’. It may seem a mere detail, but it is truly symptomatic of what has happened during the past 60 years.
For someone educated in the spirit of Liberty, Equality, Fraternity, it is difficult to accept the gap (symbolized by the lal bati) between the rulers (mostly politicians or bureaucrats) and the ruled (alias the ‘common man’).

3 Plastic bags
I really hate the plastic bags and garbage littering the streets of India. One still remembers that a few years ago during an official visit, the British Queen remarked that India was very dirty compared to Pakistan.
Since then, things have worsened terribly. One can’t blame the government for everything, though if a strict discipline with heavy fines were imposed on the public, in a short span of time, India could certainly look like a Scandinavian country. The local authorities should start installing dustbins and garbage cans in all public places and organize a speedy collection of their content.
Recently after Pongal Festival, more than 100 tonnes of garbage were left on the sands of the beaches of Chennai. The Hindu reported: “People continued their celebrations till midnight and continued to throw plastic bottles, spoons and polythene bags”. Ironically, the reporter says: “Most people seemed to have forgotten the ban on plastics on the Marina and more than three tonnes of plastic waste was collected”.
Should this not be entered in the Guinness Book of Records?

4 Environment
It irritates me when I see so little concern for the environment in India. Let us take the rivers. Last week, a group of US green activists went to Agra to inspect the Yamuna behind the Taj Mahal; most belonged to river cleaning foundations in the US. One of them, Ginny Harris of the Alice Ferguson Foundation involved in the preservation of the Potomac river exclaimed: "Oh my god, you call this a river!" A number of NGOs and local activists were present. Who uses India’s holy rivers as sewage outlets?
The government does not really care to find out who is using rivers as sewage (though the present Environment Minister seems a bit different from his predecessors).
The soil of India is supposed to be sacred. Early January, scientists attached to the Punjab Agriculture University identified the reason behind the rapid spread of cancer in the Punjab. Their verdict is clear: arsenic in water is the main cause for abnormal cell growth in the human body.
The University analyzed 168 ground water samples over a period of 36 months. The sampling originating from different parts of North India contained an unacceptably high quantity of arsenic.
For years, the Government spoke of its green revolution as a miracle India should be proud of, but this type of miracle unfortunately has serious collaterals.
What saddens me more is that India has decided to align itself with the worse State on the planet in this field: China.
Why can’t India discover a Middle Path between Development and Environment Conservation? India ranks 123rd in the last Environmental Performance Index just published by a team of experts at Yale University and Columbia University; India is not shining in this domain.

5 Lavish Marriages
I have nothing again marriages, having successfully gone through one myself (with an Indian), but it hurts my sentiments to see so much money and energy wasted for a ceremony which should be ‘sacred’. Further, the ‘outcome’ of the marriage is not always proportionate with the money invested.
What shocks me is the lavishness, verging on indecency of some Indian weddings, usually in the large metros. I don’t appreciate the ostentatious side of these ceremonies which is often more a showing of wealth (often borrowed), than the celebration of the union between two individuals.
Though considered a 'seasonal' industry, the Indian wedding industry has an estimated turn-over of over Rs 1,50,000 crores; and it is growing by the year. One could argue that it creates employment, but too many people are indebted the day after; this is not healthy.

6 Reservations
Reservations were introduced in the Constitution as a temporary measure at the time of Independence to remove disparities between different ‘weaker’ sections of the population. It was genuine problem, with no easy solution. Over the years, it has been politicized (especially during and after VP Singh’s rule) and it has now become a tool for political parties to gain power.
Why should a dalit or OBC crorepatti get more support from the government in terms of quota in a university or financial incentives than a poor Brahmin? It is just unfair.
While more attention should be paid to the poorest communities in India, the only criteria to receive financial support should be strictly economic.
For this, I admire the Indian Army which has managed for the past 6 decades to remain free from the poison of ‘cast’ quota.

7 Nouveau riche
The nouveau riche tribe is a despicable species whether in India or elsewhere on the planet. They behave particularly badly in this country. They speak loudly and they like to show-off their newly-acquired wealth. One understands that they had no time to invest to educate themselves, being too busy making money, but life, whether of an individual or a nation should be balanced. Culture is an essential part of any human being.

8 National Security
The concept of National Security is constantly misused by government babus to avoid transparency. Though the situation in India is far better than in China where you can be sent to concentration camps (known as laogais) for any real or fictitious breach of ‘national security’, Indian bureaucrats however take refuge behind the veil of this undefined concept to escape scrutiny. To take an example, under the RTI Act, section 8A allows exemption of information, disclosure of "which would prejudicially affect the sovereignty and integrity of India, the security, strategic, scientific or economic interests of the State, relation with foreign State or lead to incitement of an offence.”
Tons of important documents, having nothing to do with ‘national security’ are withheld under this pretext. Courts will one day have to define the concept more precisely.

9 Chaotic traffic
I had listed ‘traffic’ in my earlier article, but things have got much worse. I wish India would learn from China how to develop proper infrastructure (without of course having to import the workforce from the Middle Kingdom).
The ideal state would probably be the Middle Path between Switzerland, boringly over disciplined and chaotic free-for-all India.

But again India is incredible and lovable, despite these small hitches.
Posted by Claude Arpi at 2:40 PM

Email ThisBlogThis!Share to TwitterShare to FacebookShare to Pinterest
Labels: India