A Thousand-Year War over Kashmir 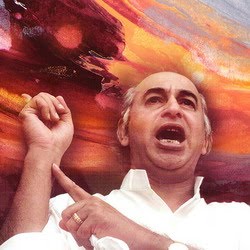 Pakistan President Asif Ali Zardari recently declared that Pakistan was ready to wage a thousand-year war with India over Kashmir.

The Daily Times quoted Zardari as saying that this was a war of ideologies and would last for generations.

Addressing a joint session of the Azad Jammu and Kashmir Assembly and the Kashmir Council, Zardari said democratic governments had played a key role in moving forward on the Kashmir dispute, he added: "When Zulfikar had spoken of waging a thousand-year war, he never said he would not do it through talks or negotiations."

You may have seen Zardari's father-in-law's video on YouTube when he addressed the UN Security Council, but what really happened  was later described by former Foreign Secretary Sultan Khan in his Memories and Reflections of a Pakistani Diplomat.

[About 1965 War]
Messages coming to Ottawa [Sultan Khan is Pakistan High Commissioner in Canada] were upbeat, the entire country rallied round the Government, patriotic fervour was at a high point and the armed forces were giving a good account of their fighting qualities. For the first time, India had introduced its airforce into the conflict, and Pakistan's Airforce had responded magnificently, covering itself with glory, despite its limited resources. At one time, a message was received from Foreign Secretary Aziz Ahmed, saying that talk of a ceasefire should be discouraged as Pakistan would soon be in a commanding position and would then negotiate from a position of strength. Within a few days, more sobering news was received: Pakistan's major thrust by its only armoured division had bogged down in fields which India had flooded, and from then on Pakistan had lost the possibility of being in the position of advantage. In fact, we lost considerable territory to the Indians on the Sindh-Rajasthan border.
The Security Council had met soon after the conflict began and was calling upon both sides to cease fire and withdraw to their own borders. This was being resisted by Pakistan in the earlier stages, but after the disaster suffered by its armoured division, there was little choice left and Bhutto was instructed to proceed to New York to accept the cease-fire proposal. I was a member of the Pakistan delegation and reached New York to await Bhutto's arrival, which was marked by considerable drama as New York airport was closed because of a snow storm, and his flight was diverted to Montreal. The Security Council session was postponed from hour to hour to enable Bhutto to participate in the proceedings, which finally began at 1:00 am.
Bhutto was brilliant in his address to the Security Council. With an American audience in mind, he talked of the Wilsonian principle of self-determination: quoted Jefferson and Lincoln on the theme of liberty and freedom; reminded the Soviets of their own struggle against the Nazis; referred the French to their Revolution when Liberty and Equality were the inspiration of their people and, in a voice breaking with emotion, asked, "Are the people of Kashmir some kind of pariahs to be denied the right of self-determination?"
Addressing Sardar Swaran Singh, the Indian Foreign Minister, Bhutto said: "Sardar Sahib, we are determined to see that the people of Kashmir are enabled to exercise their right of self-determination and we will continue to wage this struggle for a thousand years if necessary."
At this stage, in a prearranged melodrama, one of the aides came into the Security Council chamber and whispered into the ear of Syed Amjad Ali, Ambassador to the U.N., who, in turn, wrote a short note and placed it before Bhutto. He read it and asked the President of the Security Council for a brief adjournment as he had to receive an urgent phone call from the President of Pakistan. Bhutto went into one of the phone booths outside the Security Council chamber and pretended to be talking. We could see him gesticulating and expressing himself with vehemence. He emerged crestfallen and took his seat looking very subdued.
Addressing the Council, he said in a tearful voice: "I have been talking about waging war for a thousand years, but I have been over ruled by my President, who has just now instructed me to accept the ceasefire proposal on behalf of Pakistan, and I must submit to his decision." Sardar Swaran Singh who, until then, had had a very worried look on his face, smiled and relaxed, and other members of the Security Council looked relieved and the cease fire resolution passed with a unanimous vote.
Dawn was breaking when we walked to our cars, and as I rode with Bhutto to his hotel, he laughed and said: "Ayub will be furious, but when I land in Karachi, people will put garlands round my neck, and you my friend will be rebuffed by the Chinese when you reach Beijing."
What can one think of a performance like that? Was it cheap, theatrical or a calculated drama staged by a politician wanting to cash in on the gullibility of an unsophisticated home audience? Bhutto had come to the Security Council with instructions, (which he had himself advocated) to accept the cease fire resolution. By staging a drama about a phone call, Bhutto was distancing himself from Ayub; he did the same after the Tashkent Agreement and promised to reveal the secret one day, but of course nothing was ever revealed (because there was no secret). In retrospect, it is interesting to note that Ayub Khan lost his trust in Bhutto after this, but retained him to defend the Tashkent Agreement in the National Assembly and then sacked him.
I returned to Ottawa somewhat disillusioned about the way politics were being conducted at home, and also worried about the consequences which would follow the acceptance of the cease-fire resolution. It was obvious that Ayub Khan's unchallenged sway would be subject to domestic strains; our relationship with the U.S.A. would have to be restructured and the growing relationship with China would need to be carefully nurtured.