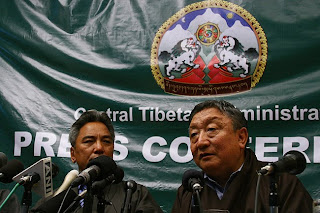 This follows the Special Meeting on Tibet chaired by President Hu Jintao on January 8. Hu spoke of a Tibet with 'Chinese characteristics and Tibetan flavor'. A bit frightening. It is doubtful if this ninth round of talks can bring any substantial progress, particularly after the recent posting of a tough administrator with PLA background  as Governor of Tibet.

Press Statement
January 25th 2010
His Holiness the Dalai Lama’s Special Envoy Lodi G. Gyari and Envoy Kelsang Gyaltsen will arrive in China tomorrow for discussions with the representatives of the Chinese leadership. This is the ninth round of dialogue. The Envoys are visiting China after a gap of 15 months in the process that began in 2002.
They will be accompanied by senior assistants Tenzin P. Atisha, Bhuchung K. Tsering, both members of Tibetan Task Force on Negotiations, and Jigmey Passang from the Secretariat of the Tibetan Task Force.
At a two day meeting of the Tibetan Task Force in Dharamsala chaired by Kalon Tripa, Prof. Samdhong Rinpoche, the Tibetan delegation finalised their preparations for the discussions in Beijing. On January 22, 2010 the Kalon Tripa and the two Envoys briefed His Holiness the Dalai Lama and sought his guidance.
The delegation is expected to return to India at the beginning of next month.
Chhime R. Chhoekyapa
Secretary to His Holiness the Dalai Lama
Posted by Claude Arpi at 6:17 PM