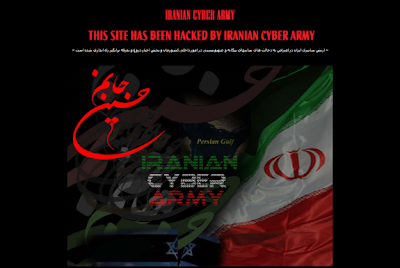 A day before Google announced that it may have to stop its operations in China, the Chinese search engine Baidu was hacked.
Strange! The hackers were said to be from the Iranian Cyber Army. Considering that Iran is close to China, it is even more strange.
A few months back, I had written on the Dark Visitors in the Indian Defence Review, things are now getting darker by the day.

Baidu Site Unavailable Tuesday Morning On Signs Of Hacker Attack
By Aaron Back
DOW JONES NEWSWIRES
JANUARY 11, 2010
BEIJING (Dow Jones)--Baidu Inc. (BIDU), China's top search engine, was unavailable early Tuesday in China, and some Internet users reported seeing signs of an attack on the site by Iranian hackers.
Users reported seeing a banner for the "Iranian Cyber Army," complete with an Iranian flag and a shattered star of David, when they tried to access Baidu's homepage Tuesday.
Marten Strassburg, a Swedish citizen living in Beijing, said he saw the site defaced with the Iranian group's logos around 10:30a.m. Beijing time (9:30 p.m. Monday EST). Strassburg and dozens of others posted screen shots of Baidu's defaced site online.
As of 11:30 a.m., Baidu was still unavailable, with users seeing just an error message when they attempted to visit the site. As of noon, the site was accessible.
Baidu spokeswoman Cynthia He declined to immediately comment, saying the company is looking into the matter.
Last month, a group also calling itself the Iranian Cyber Army attacked Twitter, temporarily disrupting access to U.S.-based social networking site. The Iranian Cyber Army also appeared to have attacked an Iranian reformist Web site.
It was unclear why the group, which appears to sympathize with the Iranian government rather than anti-Tehran protesters, would attack Baidu.
Twitter has famously become a tool for Iranian dissidents to communicate and organize, and Chinese citizens began expressing sympathy with Iranian protesters last month through Twitter. Though Twitter is blocked in China, these Internet users have found ways around the limits through use of proxy servers outside of China.
But the Internet free speech advocates on Twitter are not fans of Baidu, which is seen as in good standing with Beijing. Foreign Web sites such as Google Inc. (GOOG) have been periodically blocked by the Chinese government for linking to pornographic or politically sensitive material, but Baidu has not had similar problems with Chinese censors.
Posted by Claude Arpi at 5:54 AM