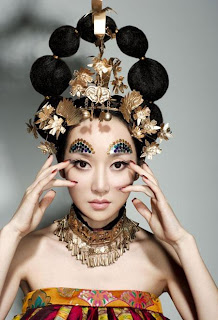 President Hu had spoken of Tibetan 'traits' and Tibetan 'flavor' while presenting Beijing's new policy towards the Roof of the World. A few days later, we hear of a Chinese singer 'promoted by the Government of Tibet'. She looks good, she may sing well in Sanskrit (!), but in what does she represents Tibet or Tibetan Buddhism?


China claims to have '1st pop singer in Sanskrit', may present her during World Expo
Saibal Dasgupta,
Times of India, 25 January 2010
BEIJING: China's official media is promoting what it describes as the first pop singer who sings in Sanskrit. She is one of the singers being considered to sign at the inauguration of the World Expo in Shanghai, which is expected to draw the glitterati from the world of business next May.
This could be the reason why Sa Dingding, who won the BBC Radio 3 Award for World Music in the Asia Pacific category in 2008, is suddenly being promoted by the provincial government of Tibet. The provincial government has indicated it wants to reshape her image and get her to focus on Sanskrit singing.
"She is also called the 'first Chinese Sanskrit singer'. To Sa Dingding, who she was in the past is not important now... To preserve her new image, she must eliminate all distractions," the local government of Tibet said on its website.
Sa, who graduated from the Academy of Fine Arts run by the People's Liberation Army, sings in the language of Inner Mongolia, Tibet and in Sanskrit. Sa is not a Tibetan although she sings in Sanskrit and Tibetan and dresses in grandiose Tibetan clothing. 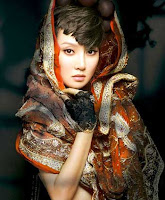 "We should pay more attention to her music, to the Zen sensation and Buddhist spirit in her music," it further said. The official site went on to say that "Her musical inspirations all come from Chinese civilization and culture."
Apparently, the local government is pushing her to give up song writing and singing in languages other than Sanskrit so she can be presented to the world as a symbol of China's rich cultural heritage.
"It is possible China may be trying to show that Sanskrit is part of its cultural heritage. What better way to draw world attention than to get a lovely voice to sing pop?," a Shanghai based expert on Chinese culture told TNN.
During major events like the Olympic Games and the celebration of the 60th anniversary of the Chinese republic, Beijing usually makes a big display of the culture and arts of Tibetans and other ethnic people. It is expected to do the same during the opening and closing ceremonies at the World Expo.
Sa also won praise from Grammy Award judge Eric T. Johnson. She is the first Chinese citizen to be invited for a tour of the United States by the Grammy organizing committee.
Posted by Claude Arpi at 7:34 AM