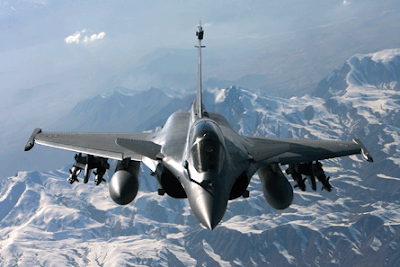 This will make it more difficult for President Lula to choose the Rafale. It may have a cascading effect for the 40 Rafales to be ordered by the United Arab Emirates and then for the 126 Medium Multirole Aircrafts to be purchased by the IAF.
2010 will be a crucial for Dassault and the French aeronautical defense industry. The French have invested a lot in the Rafale, with no concrete returns so far, at least in term of foreign orders.


Brazil air force favors Swedish fighter over Lula's pick: report
BRASILIA (AFP) --
The Brazilian Air Force's first choice in the contest for a seven-billion-dollar contract for 36 high-tech fighter jets is the NG Gripen by Sweden's Saab, and not the government's pick, the French Rafale, Folha de Sao Paulo reported Tuesday.
Citing an air force technical report, the newspaper said the French jet was not even the Air Force's second pick for the new fighters. The runner-up was the F/A-18 Super Hornet by US group Boeing.
The Rafale, an multirole fighter made by Dassault, had been seen as leading the pack since President Luiz Inacio Lula da Silva and French President Nicolas Sarkozy announced jointly in September that Brazil was negotiating to buy the delta-winged aircraft.
If that intent to purchase is confirmed, it would be the first export sale of the Rafale, possibly making it more attractive to other potential buyers Switzerland and India.
But Saab and Boeing are fighting fiercely to land the Brazilian contract, reportedly slashing prices to do so.
Lula's government has said the deal is not yet done with Dassault.
It is waiting for an air force evaluation of the three contenders to be completed. Still, Lula has stressed that the final decision is his, and will be based on political and strategic considerations.
The priority for Brazil is to acquire technology through the purchase so it can end up with the capability to build its own 21st-century fighters.
Folha said the air force preferred the Swedish model because it was less costly and potentially had better commercial possibilities. And profit margins on future local production of the French jet were theoretically less interesting to local aviation giant Embraer, the Folha report added.
Posted by Claude Arpi at 1:36 PM