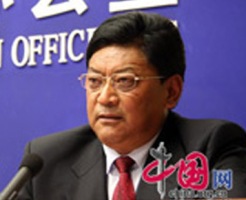 It is always amazing to see how colonizers spell local names according to their own pronunciation. Pema Thinley becomes Baima Chilin. Beijing  continues to pretend that Tibet always belonged to them, but then why  having changed the spelling of the names in the 1960's.
And of course, Tibetans will always remain 'Deputy Secretary', they will never make it to the 'Secretray' level. A colony has to be administred by the central power!


Pema Thinley named new TAR deputy party secretary
Dharamsala, January 8:
A 58-year old Tibetan has been appointed as the new deputy party secretary of the Tibetan Autonomous Region (TAR), China’s official China Daily said on Thursday.
Pema Thinley (Ch: Baima Chilin, Pelma Chiley – different versions used by Chinese state-run media), former Executive Vice Chairman of TAR, has been named the vice secretary of the Region's Party committee, the report said, giving no further detail.
As the person in charge of political and legal affairs, Pema Thinley is reportedly seen as a man who had played a prominent role in justifying the crackdown on Tibetans after the March 2008 protests in the Tibetan capital city, Lhasa.
During a conference of "TAR" court officials in the wake of unrest in Tibet, Thinley urged "the usage of law as a tool to strike back at the enemies" and called for a "swift and quick judicial proceedings" for those involved in the March protest, Tibetan Centre for Human Rights and Democracy (TCHRD) said in a report at the time.
In April last year, Thinley was sent to Markham, in eastern Tibet, as a rightful official to control situation during a tense face off between Tibetans and Chinese security forces over gold mine at Ser Ngol Lo (Year of gold and silver) in Markham county, Chamdo prefecture.
He had to be quickly escorted back to Lhasa after hundreds of angry Tibetan demonstrators ignored his appeasement efforts.