China in the Iranian Conflict 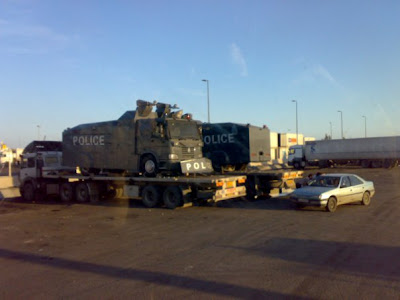 These armoured vehicles can be field tested (if they have not already been) on Iranian demonstrators and later used on Tibetans or Uygyurs when required.

Persian2English's Blog reported: "with the arrival in Iran of the first shipment of armoured vehicles, China has officially joined in to repress the Iranian people, most likely to prevent the downfall of the 'Supreme Leadership' and its own illegitimate interests in the region. The vehicles are built by military complex of Dalian DES-516B.
The armoured anti-riot vehicles have a capacity of 10,000 liters to shoot cold and hot water, and three 100 liter tanks to shoot burning chemical liquids. The water is mixed with paint or tear gas that cannot be washed away. Each vehicle has two guns for shooting liquid up to a distance of 70 meters- it is controlled from inside the cabin. The price tag for each unit is 650,000 dollars. Also, a lot of extra burning liquid, paint, and tear gas was purchased.
It took four months for the delivery of the armoured vehicles, and since the Iranian regime was in a hurry, they had them delivered from China’s army organization- this is rare!  China’s government was in as much of a hurry to get these to Iran. 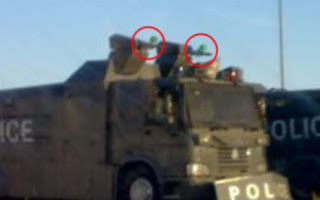 We pray that this regime will not last to get to use these violent equipments. But even if they do get to use them on the streets, it is nothing to worry about. Iranians are so creative that we will find the cheapest way to destroy them. The tyrannical and blood thirsty government of China should realize that this inhumane action against the people of Iran will turn out to be a big punishment. We will cut off their hands from our country and we will try our best to get rid of their products in our region. Also, China should wait for our full support of the people of Tibet against their barbaric crimes and the Muslim people of Sien Kiang, and we will punch their dirty mouths.
This clear interference of China in Iran’s internal affairs and their cooperation in putting down the Iranian people must be condemned by all nations of the world. We also feel sorry for the 'Supreme Leader' who is willing to kiss the bottoms of the Chinese who do not even believe in God, but is not willing to listen to the people of Iran."
Posted by Claude Arpi at 7:46 AM