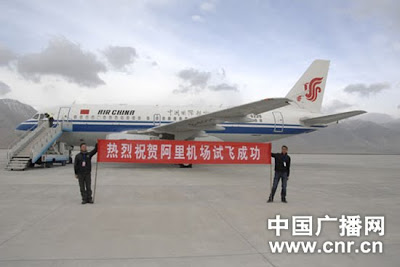 One more airport in Tibet. This time dangerously close to the Indian border in Ladakh and Himachal Pradesh.
Beijing will use the pretext of the religious sites of Tholing, Tsaparang or Mount Kailash to bring ten of thousands of tourists.
But the same airport can also be used for military purpose.

Tibet's Ngari Gunsa Airport ready to open in July
2010-06-30
Kristen Zhang
China Tibet Information Center
Tibet's Ngari Gunsa Airport is ready to open in July following the successful flight trial.
The Ngari Gunsa Airport in northwest Tibet's Ngari Prefecture is set to open in July following the successful flight trial on May 28.
The flight distance from Lhasa to Ngari is 1,098km.
Li Qiang, deputy stationmaster of Ngari Civil Aviation Administration said," The price of ticket is supposed to start from 2,590 yuan. The flights will operate on Tuesdays and Fridays. Up to now, the tickets can only be bought at the fixed stations, and the booking online service is not available. Concerned by the weather in Ngari and the large aircraft fuel load, 50 to 60 passengers can be delivered by Air China A319 in winter, and 30 to 20 ones in summer."
The airport began to be built in May of 2007 and completed the constructions in May this year at a total cost of 1.7 billion yuan.
At an altitude of 4,274 meters, the construction of the airport, the fourth of its kind in Tibet, was very difficult with the cement transport distance up to 16 million kilometers, 400 laps around the Earth.
Ngari Prefecture, 1,600 km away from Tibet's capital of Lhasa, lies in the northwestern part of Tibet with complicated geological conditions.
Transportation has been a bottleneck to the area's social and economic development, especially the development of the local tourism industry, according to local authorities.
Posted by Claude Arpi at 5:39 AM