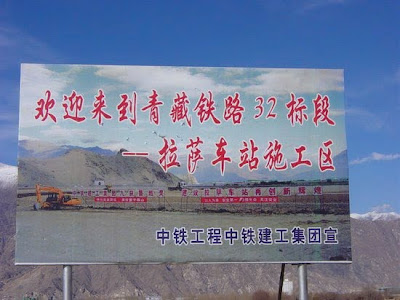 After Tibet, it is now Pakistan. Tomorrow it will be Burma and Nepal.  Foreign Minister SM Krishna says: "we are closely watching what is happening".
Is it enough?
Last week the following news item appeared in the press: "Arunachal Lok Sabha MP Takam Sanjoy has appealed to the Centre to reconsider the proposal for construction of a Greenfield Airport at Tawang taking into consideration its strategic location and country’s security. His plea follows the ‘news’ that the Union Ministry concerned had put on hold the proposal.In a letter to Praful Patel, the Union Minister of Civil Aviation, Sanjoy said, “After making extensive aerial and ground surveys for the construction of Greenfield Airport at Tawang, feasibility reports were submitted to your Ministry for early sanction, which is still awaited”. Resenting the inordinate delay on sanctioning of the project, the MP from West Parliamentary Constituency under which Tawang falls, urged Patel to pursue the matter at the earliest."
On one side of the border Sino-Indian border, Beijing builds airport, roads and railway lines, on the other side clearance for a small airport is 'awaited'!


Pak dismisses India's concern over Pak-China rail link in PoK
PTI July 8, 2010
Pakistan today dismissed India's concern over a proposed Pakistan-China rail link through the disputed Gilgit-Baltistan region in PoK, saying New Delhi has "no locus standi" in the matter.
Abdul Basit, the Pakistani foreign office spokesman, dismissed India's objections to the Pakistan-China proposed rail link through the disputed Gilgit-Baltistan region in the Karakoram ranges.
Amid concerns voiced by India over the rail link through the disputed Pakistan-occupied-Kashmir (PoK), he told a weekly news briefing here that New Delhi has "no locus standi" in the matter and that its objections are "uncalled for and irrelevant".
The rail link is a matter of concern to India as it passes through some of the disputed areas forming part of PoK.
According to experts, the rail link is part of plan by China to encircle India through cooperation with its "all weather" strategic partner.
India's external affairs minister SM Krishna said in New Delhi that "we are closely watching what is happening".
Earlier, minister of state for defence MM Pallam Raju said the rail link is definitely a matter of concern.
"But we are taking our counter measures and we are doing our own preparation," Raju said.
According to earlier reports, Pakistan had awarded a $1.2 million contract to an international consortium to conduct a feasibility study for the 750-km rail line in 2007. As per the past proposal, China would lay the track up to Khujerab.
Posted by Claude Arpi at 7:56 AM