Karmapa not allow to visit the US 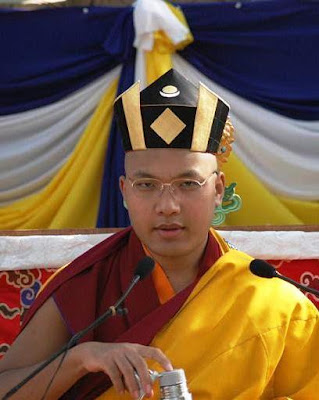 Ogyen Trinley Dorje, the 17th Karmapa will not go to the US. At least for the time being. I will not comment on the possible reasons for the Government of India to refuse the clearance. I did this earlier.
However, I would like to talk about what could be a secondary factor in the decision: the fact that the press projects the young Lama as the Dalai Lama's successor.
I think that it is wrong. First, what does it means to be 'the Dalai Lama's successor'? Spiritual successor? Political successor?
Regarding spiritual or religious affairs, only the next Dalai Lama can be the successor of the present one's. Further, there are several very wise Lamas in exile with great spiritual and religious experience and wisdom who could also pretend to become a 'successor'. Why to limit the choice to the Karmapa?
In any case, does the Dalai Lama need a 'successor'. He recently hinted in an interview that he could live a very long life, perhaps till 100. It would therefore be wise to wait a bit.
Regarding a 'political successor', the present Dalai Lama has worked hard from the early 1960's to introduce democracy in the exile community. To have a 'political successor' would mean to negate all these years of  hard work. Would a 'political successor' prevail over an elected Kalon Tripa (Prime Minister). It does not make any sense. Tibetan democracy would become a laughable farce.
Further, historically, the regency (with Regents or temporary successors) has been the bane of the Tibetan system of governance. Remember the power struggle between Regents Reting and Tagtra in the 1940's. It has taken the Land of Snows to the brink of a civil war.
Of course, for certain media, a successor to the Dalai Lama sells well, but is it good for Tibet?
Another question about of the denial of the permission for Karmapa's US visit: was it the message brought by Foreign Secretary Nirupama Rao to Dharamsala? Was the decision 'influenced' by Beijing (National Security Advisor Menon visited China a week earlier)? We will have to ask Paul the Octopus?

India says no to US tour of Tibetan monk
IANS, Jul 15, 2010, 01.57pm IST
DHARAMSALA: India has denied permission to Ogyen Trinley Dorje, the 17th Karmapa who is the third most respected Tibetan monk reincarnate and is recognised by both the Dalai Lama and China, to go on a two-week religious tour to the US this month.
His private office on Thursday said he was denied permission without citing any reason by authorities.
"The Karmapa was scheduled to attend prayer sessions being organised by Karma Triyana Dharamchakra centre in Woodstock in New York that began yesterday (Wednesday), but Indian authorities refused to grant him permission to visit there," Gompa Tsering, Karmapa's secretary, said.
The 25-year-old Karmapa is the spiritual head of the Karma Kagyu School, which is one of the four sects of Buddhism.
"We fail to understand that why restrictions were imposed on his movement as the tour was purely a religious one. Moreover, the government has not cited any reason for declining to grant permission," he added.
The Karmapa is considered the third most important Tibetan religious head after the Dalai Lama and the Panchen Lama. Currently, he is devoting most of his time in receiving teachings of the Karmapa lineage.
The Karmapa office in Gyoto Tantric Monastery got information from the Tibetan government-in-exile about Delhi's refusal to permit foreign visit.
However, the office of ministry of external affairs here has refused to comment.
Earlier too, the Karmapa was denied permission to visit European countries.
"He was scheduled to visit Europe for five weeks in May, but he was denied the permission at that time too. May be at that time, he was declined permission because the tour was too long. We hope the (Indian) government would be more positive and open towards his future religious programmes," said another Tibetan official.
The Karmapa, who lives in temporary accommodation at the Gyoto Tantric Monastery, was allowed to visit the US in May 2008 and that was his only visit abroad.
Born on June 26, 1985, in Kham region of eastern Tibet, Dorje fled Tibet and sought refuge in India in January 2000. Ever since, he has mostly lived in the monastery in Sidhbari near Dharamsala - the seat of the Tibetan government-in-exile.
The Tibetan government-in-exile is not recognised by any country in the world.
Posted by Claude Arpi at 7:31 AM

I appreciate your posts on this topic but it seems to me there is more going on than Indo China relations. The Tibetan Government is also involved.

What about the "Gyalwang Drukpa"? What role is he playing in this controversy? Is that the hair of the “dakinis” he glues on his head??

Scroll down to photo in article:
http://www.drukpavietnam.org/index.php?option=com_content&view=article&id=141&Itemid=63&lang=en