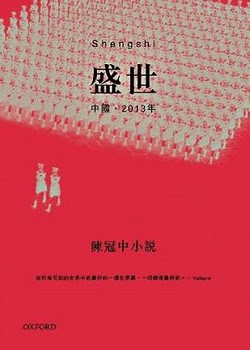 This Book Review published by The South China Morning Post is fascinating. Koon-chung Chan's story is in itself fascinating. Has China been on the wrong track? Was Deng Xiaoping's slogan: "To become rich is glorious' only maya (illusion)?
Another reviewer Zhansui Yu (A Critical Reading of Shengshi: Zhongguo 2013) says that: "the author provides a convincing assessment of how deceptive propaganda, historical misrepresentation, and forced amnesia work together to severely distort the personality and mentality of China’s new generations. In tracing the causes for the distortion, the author points to three factors:
(1) The Party-state’s dictatorship. In the novel, the Party-state’s manipulation and control of the nation’s mentality are symbolically represented by the government treating China’s drinking water with a chemical which can change people’s moods. This is the secret behind the entire nation’s intoxication with the feeling of happiness.
(2) Chinese intellectuals’ abandonment of their role as “social conscience” and their complicity with the Party-state. In response to Old Chen’s question of “whether Chinese intellectuals are really willing to reconcile with the Party,” Zhuang Zizhong repudiates this as a pseudo-question. As he argues, “the real question is not whether the intellectuals are willing to reconcile with the Party but whether the Party is willing to forgive the intellectuals [for their trouble-making and disloyalty]” He asserts that 'recognition by the Party' is the greatest success and honor possible for Dushu and for himself. It turns out that Chinese intellectuals are bought into the system through the material gains and social status granted to them by the Party.
(3) Acquiescence and indifference on the part of ordinary Chinese people. As the national leader He Dongsheng points out, though the Central Propaganda Department does indeed do a lot of work to cover up the truth of the lost month, it is the Chinese people themselves who choose to forget in the first place. As he argues, 'If it were not that the Chinese people want to forget, it would be not possible for us to force them to do so.' He concludes that 'it is the ordinary Chinese people themselves who voluntarily take the drug which causes the amnesia'.”
About amnesia, it is unfortunately also rife in India. Just look at Senior Gen. Than Shwe, Myanmar's junta boss who came on a 5-day "religious" visit to India. Though Shwe is one of the worse dictator of the planet, he is a guest of President Pratibha Patil. 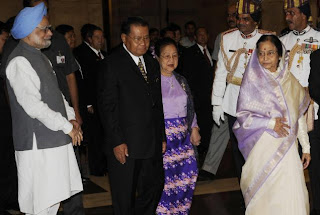 2013 Them and Us
Book Review of Koon-chung Chan's "Shengshi"
South China Morning Post
Paul Mooney
February 7, 2010
Chan Koon-chung's new book is making waves among mainland intellectuals for its eerily realistic fictional account of a modern, prosperous China - and its veiled criticism of those who buy into it
It's the year 2013 and China is stronger and richer than ever before, while the rest of the world is still reeling from a huge economic tsunami that struck a year earlier. Starbucks is now owned by the Wang Wang Group, and the hottest new drink around the world is longane dragon well tea latte.
The authoritarian, and often ruthless, Communist Party faces no serious opposition and is patting itself on the back for not following the path of the West. Capitalism with Chinese characteristics is thriving and foreigners who once lambasted China over human rights are now afraid to offend China. Most interesting, the majority of the Chinese people, at least the residents of major cities, are enjoying unprecedented fat times, and couldn't be happier.
This is China's future as described in The Golden Age, a new novel by Hong Kong writer Chan Koon-chung, who has lived on the mainland since 2000, spending the last nine years gathering string for this book.
The Chinese title, Shengshi Zhongguo 2013, which can be translated as a prosperous and grand period, has been used to describe the two apogees of imperial history, the Han and Tang dynasties. It's also a term that is appearing more and more frequently in the Chinese media today and which is becoming a daily part of conversations - as a giddy description of present-day China.
While the book was released in recent months in Hong Kong and Taiwan (it's too sensitive to be released on the mainland), it's creating an increasingly loud buzz among mainland intellectuals in China for it's realistic description of contemporary China and its veiled criticism of the growing number of Chinese who have either bought into the system or have been bought by it.
The story is told through the eyes of Lao Chen, a Taiwanese writer who has lived in Beijing for many years, and who shares the strange mass happiness that has smitten the majority of China's population. Or at least he seems quite complacent until he accidentally runs into two long-lost friends, Xiao Xi and Fang Caodi - the only discontented people he's encountered in a long while.
Xiao is a 1980s activist who is frustrated because her former intellectual friends have abandoned the fight against repression in exchange for more comfortable living. "They've changed ..." she tells Lao when they meet. "They've all become so satisfied."
Fang, the son of an early Communist defector, and a drifter, is on a quiet mission to prove that an entire month has been erased from the collective memory of China's 1.3 billion people, with the exception of a small number who seem to have retained their memories -including both Fang and Xiao.
Lao, a successful writer, is a bit disconcerted by the strange claims of his former friends, and he has little sympathy for their cause, until they involve him in the kidnapping of a senior official who spits out the truth about what the government has been doing.
As He Dongsheng comes out of his drugged state, Lao, Fang and Xiao begin to interrogate the official, who is tied to a chair. He willingly describes how trouble broke out in a few places around China following the economic crisis of 2012, and how, according to a secret party plan, the People's Liberation Army, People's Armed Police and police purposely hold back, except in Tibet and Xinjiang , waiting for the chaos to reach a point where the frightened population becomes afraid of anarchy and begs for the government to step in. When the PLA eventually marches into one city to restore order, the people line the streets to welcome it. In an ensuing "strike hard" campaign, the party takes advantage of its popular mandate to wipe out all its foes.
The campaign is so vicious that the government decides to place a new drug into the water system and all beverages, which has the effect of putting the country on a collective high. An unintended plus is that the vast majority of the population has had its memory of the three weeks of chaos completely erased. To be safe, the government has taken advantage of its good fortune - no one honestly knows how this happened - to destroy books and newspapers and to rewrite what's available on the internet.
When Lao visits a book store and asks for books by several famous authors, a search of the store computer indicates the books don't exist. When he confronts the manager and asks about books by Yang Jiang, a famous writer, the manager stares at him, confused, and says, "Which Yang Jiang?"
The Golden Age represents the frustrations of many intellectuals, who previously had high hopes for reform. Chan says that while the party launched huge economic reforms over the past three decades, politically not much has changed.
"In the 1980s there were hopes for constitutional democracy but it's now very obvious that's not the way to go for China," he says, recognising the reality. "A new Chinese-style governance has been established and is accepted."
Posted by Claude Arpi at 7:57 AM