Another aspect of the Karmapa issue 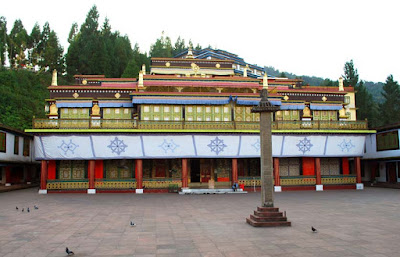 This is another important aspect of the Karmapa issue. One tends to forget that the young Lama is still persona no grata in his own monastery.
Why? Probably for the reasons given in my Sify.com article.
I think that there is still a case pending in the Sikkim High Court.

GANGTOK, July 18: Calls for the 17th Gyalwa Karmapa, Ogyen Trinley Dorjee to take his seat of power at Rumtek Dharma Chakra Centre located in East Sikkim have intensified with three major monasteries of Kagyu School of Tibetan Buddhism here collectively taking a lead.
The Gyalwa Karmapa is the head of Kaygu School of Tibetan Buddhism while Rumtek Dharma Chakra Centre is the headquarters of this School.
The three major Kagyu monasteries in Sikkim – Phodong monastery in North Sikkim, Ralong monastery in South Sikkim and Old Rumtek monastery have joined hands together to throw life in the dormant demand pending with the Centre to allow the 17th Karmapa to take his rightful throne at Rumtek Dharma Chakra Centre.
To back them were monks from several monasteries across Sikkim including the premier Pemayangtse and Enchey monasteries, both from Nyingma School of Tibetan Buddhism, other associations and non governmental organizations.
With the monasteries themselves taking the lead, the calls have acquired urgency with a strong support from the people and followers of the 17th Karmapa.
The first meeting of monks, management committees of the monasteries and non-government organizations had been held at Phodong monastery on June 12 and the second meeting was held at Ralang monastery on June 27. Both the meetings drew great response.
The final meeting was held at old Rumtek monastery at Rumtek, 25 kms away from here today where monks and representatives of several associations participated along with the followers of the 17th Karmapa.
During the daylong meeting, speakers after speakers highlighted the need to refresh the pending demand on a stronger note to the Union government as previous representations and memorandums have failed to achieve the desired results.
“There is only demand of the Buddhism followers of Sikkim. Our Karmapa should be allowed to come to his house (Rumtek Dharma Chakra Centre). Until the matter is resolved, the three monasteries of Ralang, old Rumtek and Phodong will not rest”, said Ralang monastery representative NT Bhutia.
A Joint Action Committee (JAC) has been formed to support the monasteries in their bid to bring the Karmapa to Rumtek.
“There is no controversy regarding who is the real Karmapa. That chapter is closed. Ogyen Trinley Dorjee is the real 17th Karmapa and he should be allowed to come to Rumtek”, said the JAC general secretary, Sonam Topden.
Former minister Thukchuk Lachungpa who is a member of the JAC said that the monks, representatives of various associations and followers of the 17th Karmapa will be conducting a massive rally in Gangtok to highlight the chief demand. “We will also be requesting the Chief Minister to lead a delegation from Sikkim to place the demand before the Centre for allowing the Karmapa to visit Sikkim,” he said.
Karma Tshering Bhutia, president of Old Rumtek monastery managing committee said that a body has been constituted during the meeting today which will be headed by Lok Sabha member PD Rai to take the matter ahead with the Union government. The JAC will be supporting the body which will also have five members from each of the three monasteries, he said.
Students at Rumtek Dharma Chakra Centre also voiced their demands for allowing the Karmapa to visit Rumtek. Without our Karmapa, we feel orphaned and we have been conducting five to six special prayers at the monastery for his visit to the monastery, said Bhaichung Bhutia, a student studying Buddhism at the centre.
Despite repeated requests from the State government and his followers, the 17th Karmapa who stays in Dharmasala has been not allowed by the Centre to visit Sikkim. The nearest place that the Karmapa has been to is Mirik in Darjeeling region where he has been conducting pujas at the local monastery on special occasions for the past two years.
While the three public meetings conducted by the monasteries which was attended by monks and followers from all the four districts have placed the demand in the public domain once more, the strategies to be launched in Sikkim on a higher decibel are expected to be implemented in the coming months.
The monks and followers of the 17th Karmapa is pinning their hopes once again on the State government, especially Lok Sabha member PD Rai.
On his part, Rai pointed out that bringing the Karmapa has been committed by the ruling Sikkim Democratic Front (SDF) party in its election manifesto and added that the Chief Minister has been sincerely pursuing the matter with the Union government.
“We are definitely hoping that the Government of India will sooner or later bring the 17th Karmapa to Sikkim and towards that end, we will work. It is definitely a difficult issue, but difficult issues are what the SDF party prides on”, said Rai
The Lok Sabha member said that as a MP, he will be working on the matter in New Delhi with the help of the Chief Minister, cabinet colleagues, Rajya Sabha member OT Lepcha, Northeastern MPs and other interested groups.
Posted by Claude Arpi at 6:25 AM

I had been to Pemayangtse, while traveling through beautiful Kanchenjunga mountains and valleys. From here the Nepal valley can also be seen. The Pemayangtse Monastery encircles a rare collection of ancient Buddhist antique idols, scriptures, carvings, as well as sculptures.