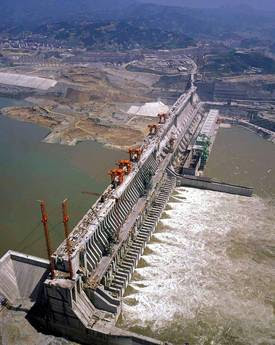 This is the danger of these megastructures. Today, Southern Tibet sufferings from a serious drought, what will happen tomorrow if the Yarlung Tsangpo basin is threatened by floods. Water release will be sent downstream to India? Beijing government can't pretend that this is 'their' problem only.


China to Drain Overfilled Reservoir Threatening Qinghai-Tibet Railway
2010-07-12
Xinhua
Editor: Han Yueling
Hundreds of soldiers and armed police are rushing to complete a drainage channel to prevent a dangerously overfilled reservoir from bursting and flooding a city of 205,700 people in northwest China.
Authorities said they expect to drain the Wenquan Reservoir, 130 km from Golmud City, Qinghai Province, by early Tuesday.
Golmud, which is Mongolian for "place with many rivers," is nestled in a mountainous area where melting snow from the Kunlun Mountains forms rivers that flow through to the Qaidam Basin.
Days of heavy rain this month coincided with the snow-melt and caused torrents of water to pour into the Wenquan Reservoir, pushing up the water level at one point to 1.18 meters above the warning line, officials with the provincial disaster relief headquarters said.
According to the latest weather forecast, rain will again soak Golmud and the reservoir area on July 13. More rains are expected in the coming days in the mountains south of Golmud, which might also cause rivers in the region to overflow.
More than 9,700 residents in the city have been relocated in 1,200 tents in the safe area as of Monday afternoon. Guolemude Town was the hardest-hit, with water as deep as two meters filling the town.
Anbu, a resident of the town, was waiting to be evacuated with her belongings, including a white iron bucket full of kids' toys. "Water is knee-deep in my house. We have to leave our house for fear of flooding," said she.
Soldiers have been using excavators to dig an waterway from the Wenquan Reservoir since July 7. Trucks carrying earth, mud and rocks have dotted the mountain pass leading to the reservoir, about 3,960 meters above sea-level.
Deng Bentai, a deputy governor of Qinghai, earlier told Xinhua if enough rocks were supplied to finish the waterway, work could start Tuesday to discharge the excess water.
Officials said the digging phase of the channel -- 250 meters long, 12 meters wide and nine meters deep -- had almost ended.
The soldiers are laying steel nets, stuffed with rocks, to the base and sides of the channel to prevent mud-flows.
Officials expected the new channel and two existing channels to release 400 cubic meters of water a second, relieving pressure on the reservoir which contains 240 million cubic meters of water, 30 million cubic meters more than its previous high.
If it bursts, the reservoir could inundate Golmud with water up to four meters deep. The city's power and water plants are also at risk, according to the municipal government.
The Qinghai-Tibet Railway, the world's highest railway, could also be hit by flood waters as it is only 40 km from the reservoir.
On July 8, a new round of rainstorms started to batter provinces and regions in central and southwest China, triggering floods and landslides, bursting dikes, and destroying houses and farmland.
In Qinghai, 28 people have been killed since July in the province's worst floods on record. The lives of about 60,000 residents were affected.
Wang Xin, deputy head of the provincial weather forecast bureau, said the amount of rain and the scale of devastation were "unprecedented."
She said drainage systems in cities other than provincial capital Xining were too "fragile" to deal with the kind of heavy rains Qinghai experienced in the past few days.
Provincial authorities have mobilized 2,000 armed police to lay sand-bags, and steel or lead nets at the Golmud Dam and along the Golmud River downstream of the Wenquan Reservoir.
Yu Congle, provincial water resources chief, said he was not optimistic as the water levels of many rivers in Qinghai were up to record highs, while the flood control systems were not functioning well.
About 128 of the province's 150 reservoirs faced the danger of bursting, he said. "We face an arduous task."
Heavy rains since July 8 have affected 18.3 million people in regions along the Yangtze River, leaving 43 dead and 18 missing, China's flood control authorities said Monday.
The death toll released by the State Flood Control and Drought Relief Headquarters (SFDH) excluded deaths caused by lightning strikes.
A total of 39,000 homes had collapsed, 755,000 people had been evacuated and 974,000 hectares of crops were affected by floods, resulting in direct economic losses of 10.6 billion yuan (1.57 billion U.S. dollars), according to the SFDH.
By 2 p.m. Monday, the water levels in major lakes and streams along the middle and lower reaches of the Yangtze River had been slowly rising, according to the SFDH.
Continuous heavy rains pose a significant threat to small reservoirs since they are less resistant to rising water, said Cai Zhengzhong, spokesperson of Flood Control and Drought Relief Headquarters of Anhui Province where water in 709 small reservoirs was reported above the safety level.
Relocation and rescue is underway. Hubei Provincial Civil Affairs Department and Finance Department earmarked 22 million yuan on Monday to compensate victims' families, send relief to the evacuees and rebuild damaged houses.
But the rain is not an ill wind. Drought in southwest China's Tibet Autonomous Region is expected to be eased with the upcoming rains in mid July, according to the region's Meteorological Center.
Drought, beginning last October, hit the area along the Yarlung Zangbo River in Tibet where the area' s main farmlands are located, according to the center.
Posted by Claude Arpi at 7:45 AM