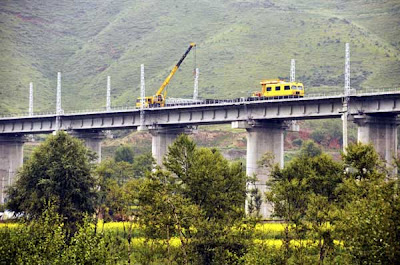 Already in March this year, the  China Tibet Information Center had announed two more railway extensions in Tibet: "Two more railways linking Lhasa with Xigaze (Shigatse) and Nyingchi (Nyintri) will start construction, said Zhang Qingli, Tibet regional Party committee."
Zhang added: "As more and more tourists visit the Tibet Autonomous Region, it is difficult to buy tickets either for trains or for airplanes. With the improvement of traffic conditions, visitors will be able to have their journey in a larger scope and the pressure for traffic will be reduced. ...As for the environment pressure, for such a large-area Tibet, several million tourists with environmental protection consciousness can't destroy."
Well, I will not comment on the environmental aspect, but on the strategic angle, it is a very serious development and unfortunately, the present Indian Railway Minister has other more important commitments.

I am reproducing another news item: China will completed  the 2nd Line of Xining-Tibet railway line to Lhasa in 2010. 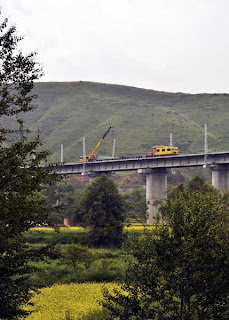 The same website shows pictures of the construction: "Rail workers use cranes and construction vehicles to build the Xining-Golmud Second Line of the Qing-Tibet Railway on the Bayante Bridge, Huangyuan country, Xining city, Northwest China's Qinghai province on July 21, 2010. The line is expected to be completed by the end of 2010, ahead of the plan deadline by 21 months. It will be an electric railway with a cargo transportation capability of over 50 million tons a year and its passenger trains will attain speeds of up to 160 km/h."
Please note that project will be completed 21 months ahead of time.
India perhaps needs to hire China's Railway Minister!
Posted by Claude Arpi at 7:49 AM