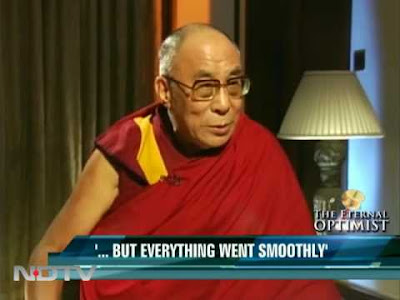 A strange article was posted today on a Chinese official website on Tibet. It says that the Dalai Lama is reconsidering his position vis-a-vis independence.
What is his position?
On June 18 1988, the Dalai Lama addressed the Members of the European Parliament in Strasbourg. Officially renouncing independence for his country, he explained: "I thought a long time on how to achieve a realistic solution to my nation's plight." He explained his new proposal (since then known as the Strasbourg Proposal): "The whole of Tibet should become a self-governing democratic political entity founded on law by agreement of the people for common good and the protection of themselves and their environment, in association with the People's Republic of China. The Government of People's Republic of China could remain responsible for Tibet's foreign policy. The Government of Tibet should however, develop and maintain relations, through its own Foreign Affairs Bureau, in the fields of commerce, education, culture, religion, tourism, science, sports and other non-political activities."
Though many young Tibetans never accepted what they considered as a surrender to the Chinese invaders, the Dalai Lama has always stuck to his offer.
The Chinese leadership has however never acknowledged the fact that the Tibetan leader was no more seeking independence from the 'Chinese motherland'.
In June 1998 while on a visit to Washington DC. President Jiang Zemin offered to reopen the dialogue, but he put a condition, the Dalai Lama should renounce Independence (though he had already done so 10 years earlier). Clearly, Beijing had refused to acknowledge the message which was loud and clear. During the Joint Press Conference with President Clinton, the US President asked Jiang Zemin to discuss with the Dalai Lama: "I urge President Jiang [Zemin] to assume a dialogue with the Dalai Lama in return for the recognition that Tibet is a part of China and recognition of the unique cultural and religious heritage of that region." Then the US President added: "I have spent time with the Dalai Lama, I believe him to be an honest man, and I believe if he had a conversation with President Jiang, they would like each other very much."
President Jiang answered: "As long as the Dalai Lama makes a public commitment that Tibet is an inalienable part of China and Taiwan a province of China, the door to dialogue and negotiation is open."
Despite this declaration, and the reopening of the dialogue in 2002, the Chinese authorities have always said the Dalai Lama has never renounced 'independence', therefore the article reproduced below is rather strange.
Or perhaps, the author has no knowledge of the background. Everything is possible.