Chinese propaganda about a 'Son of India' 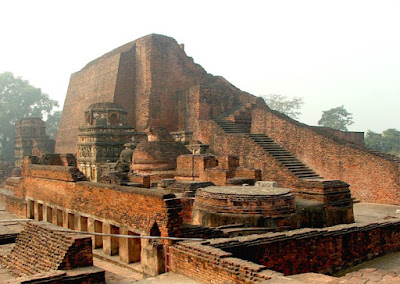 The Chinese authorities seem highly disturbed by the fact that the Dalai Lama calls himself a 'Son of India'. Articles after articles are published in the official Chinese Communist press denouncing what they perceive as an heresy.
What is so difficult to understand?
The Dalai Lama is a Tibetan, born in Tibet, an Amdowa, born near Kumbum in the Eastern Province of Amdo, but culturally his tradition is born and flourished in India. During a recent encounter with the Dalai Lama, he explained: "I always describe Tibetan Buddhism as pure Buddhism from the Nalanda tradition. In Mahayana Buddhism, whether it is from China, Japan, Korea, Vietnam or Tibetan, also Mongolia, we all recite the same Saddharma Pundarika Sutra or Lotus Sutra.
We recite the same texts, all translated from Sanskrit. We all practice Mahayana.The Buddhist tradition of Nalanda uses Sanskrit language; Nalanda is the true promoter of the Mahayana tradition. Nalanda had great masters like Nagarjuna and Arya Asanga.
The important point is that during the 8th century, the Tibetan emperor invited a great master of Nalanda. His name was Shantarakshita. He was a famous, well-known scholar and master of Nalanda. He went to Tibet and spent the rest of his life there. He introduced Buddhism in Tibet. That is why I consider that Tibetan Buddhism is the authentic tradition of Nalanda.
I myself studied the Nalanda tradition of Buddhism; first I learned by heart and memorised what we call the Root Texts. All these Root Texts have been written by Nalanda masters. Then, I continued the study and learned word by word with the help of commentaries, mainly written by Indian Masters from Nalanda. Of course, we have also some Tibetan commentaries.
Therefore the Tibetan Buddhist tradition is the Nalanda tradition which combines the Sanskrit and the Pali traditions as well as Buddhist Tantrayana. Masters like Nagarjuna, Aryadeva and Chandrakirti wrote tantric treatises (in Sanskrit)."
He can be therefore considered as a cultural ambassador of India, at least as far the Nalanda tradition is concerned. He never said that he represents the MEA, that is a Chinese invention.
The fact is that there is today no better ambassador than the Dalai Lama to represent this tradition which has disappeared from the Land of the Buddha but belongs to the Indian cultural and religious heritage.
The Tibetan leader said: "Sometimes, it irritates the Chinese officials. What to do?"

14th Dalai Lama lashed out for his self claim of "100% Indian"
2010-07-26
China Tibet Information Center
Backgrounder
Days ago, the Dalai Lama clique was quite engaged in celebrating the 75th birthday of the 14th Dalai Lama. The Dalai Lama's "merits and virtues" were unscrupulously honored through statements, congratulations and congregations bombarded by the bogus government, the bogus parliament, "Tibet independence" gangs as well as some western nosy parkers. In the meanwhile, the attack against the Chinese government was launched as usual.
It seems that the Dalai Lama has lost his bearings by the lauds lashed by himself, he was especially impudent during an interview with India's New Delhi Television in Dharamsala on July 6. And only then, we could glimpse at some of his true thoughts. Now, I will make a brief introduction.
A signed article released here Monday has criticized the Dalai Lama for his claim of "100% Indian", which has before bought him a bad name worldwide.
At an Indian TV show "In conversation with the Dalai Lama" by the National Deli Television (NDTV) on July 6, 2010, the Dalai Lama went beyond his previous claim as “son of India” and made such remarks as above.

I. Considers himself as a "100%" Indian
Firstly, the Dalai Lama considers himself as a "100%" Indian.
An ordinary person usually thinks of his hometown on his birthday. The Dalai Lama's own profile reveals that he was originally born in Qijiachuan, Huangzhong County of northwest China's Qinghai Province, with a folk name as Lhamo Thondup. His father Chocho Tsering and his mother Dekyi Tsering were both purely local peasants.
In 1939, Lhamo Thondup was escorted by a troop sent by the Chinese central government to Lhasa, as one of the candidates of the reincarnation boys of the 13th Dalai Lama. In 1940, the then National Government of China announced the approval of his succession to be the 14th Dalai Lama. From that time till his escape to India after he failed in his armed rebellion launched in 1959, the Dalai Lama was fed by the Tibetan people for at least 24 years.
It is understandable that the Dalai Lama was reluctant or too ashamed to talk about his hometown in China, but facing the Indian reporters, he appeared extraordinarily enthusiastic and passionate when ignorantly claiming that "I refer to India as my country ... If you open my brain I am 100% Indian."
What's more, the Dalai Lama shamelessly proclaims himself an "Indian envoy" for international affairs even without any of the approval by anyone from the Indian side.
I always believe that it is the Dalai Lama's own business to choose his citizenship, for which in fact, nobody cares.
However, now that the Dalai Lama decides to be an Indian, he then has no reason to make any indiscreet remarks towards issues related to China's Tibet about to give more concern over India's internal affairs. Obviously neither does the Dalai Lama seem to be interested in nor dare to do so.
As "wise" as he is, the Dalai Lama clearly understands his position: Living in India and only by abusing China occasionally could he show his "courage and insight" and thus flatter a certain group of people in the world, but he is absolutely in no position to talk about India’s affairs in case his Indian daddy gets annoyed.
Posted by Claude Arpi at 6:50 AM