The archeology of the Tibetan plateau is a relatively new disciple. Though explorers such as Tucci, Hedin, Richardson or Roerich did the first archeological surveys at the beginning of the 20th century, their studies remained superficial.
The scenario has changed during the past 2 or 3 decades with more scientific studies being conducted by Tibetan, Western and Chinese archeologists. Their researches dwell not only upon Western Tibet, rich in ‘pre-Buddhist’ vestiges, but also on other parts of the plateau, like Amdo and Kham.
The latest archeological discoveries open new perspectives on the history of the plateau, particularly regarding the Zhangzhung kingdom. Archeologists believed today that a climate change altered the balance of power a few millennia ago. Due to the drought and subsequent increase in salinity of the areas around the large lakes of Northern Tibet, the political center may have progressively shifted to warmer and moister regions like Yarlung.
The Chinese research mentioned in the article reproduced below is interesting but its conclusions are very political. Why 3000 years?
In any case the Tibetan plateau is an extremely large area (25% of China landmass) and migrations have occurred not only from the Chinese plains (one can find traces in Chamdo and Amdo area), but also from the Indian Himalayas, particularly from Ladakh as well as from Eastern Turkestan and Central Asia. To put a blanket 3000 years for the 'mutation' is therefore automatically erroneous and probably politically motivated. 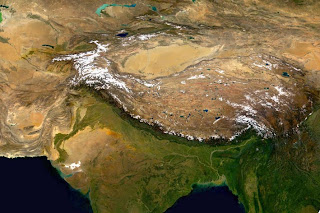