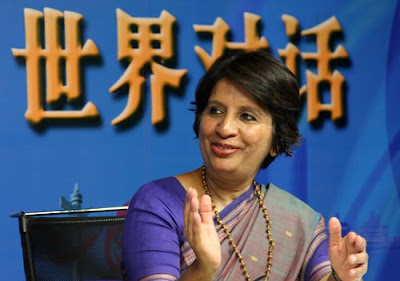 A rather mild reaction from the Chinese Foreign Ministry spokesperson! It means that Beijing had been informed in advance by NSA Shivshankar Menon of the visit of the Indian Foreign Secretary to Dharamsala.
The Dalai Lama's Administration in Dharamsala said that the visit was 'by and large good'. They have also learn to speak in riddle.

China urges India to honor Tibet-related commitment
English.news.cn   2010-07-13
BEIJING, July 13 (Xinhua) -- China on Tuesday urged India to honor its commitments and cautiously handle issues related to exiled Tibetans in India.
Foreign Ministry spokesman Qin Gang made the remarks in response to Indian Foreign Secretary Nirupama Rao's meeting with the Dalai Lama on Saturday at a regular news briefing.
China has made clear its stance on the issue to the Indian side, Qin told reporters.
"The Indian government has repeatedly acknowledged to China that it recognizes Tibet as part of China's territory and does not allow exiled Tibetans to conduct anti-China activities on the Indian territory," said Qin.
Posted by Claude Arpi at 6:42 AM