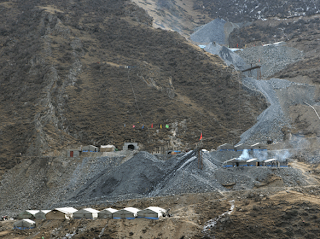 According to some news agency reports, the International Energy Agency (IEA) has announced that China had surpassed the United States to become the world's top energy consumer. Though Beijing called it an 'unreliable' data, The Financial Times and the Wall Street Journal cited a top IEA official as saying the Asian giant had taken over the top spot in 2009, earlier than expected.
According to the IEA, China consumed 2.252 billion tons of oil equivalent of energy in 2009, from sources that included coal, nuclear power, natural gas and hydroelectric power -- about four percent more than the United States.
The Chinese ogre is bound to use more and more the resources 'at home' (read in Tibet). It is bad news for the Tibetans. Today, Xinhua published the following article.


China National Gold's Tibet mining project begins production
Xinhua
2010-07-20
China National Gold Group (CNGG) said Monday the first phase of its Gyama polymetallic mine in Lhasa, capital of the Tibet Autonomous Region, began production Monday, giving a boost to economic development in the mineral-rich region.
Located in Meldro Gungkar County, the first phase of the project has an expected daily output of 6,000 tonnes.
CNNG subsidiary Tibet Huatailong Mining Development Co. started construction on the 8 billion yuan (1.18 billion U.S. dollars) project in 2008.
The mine will eventually have a daily output of 15,000 tonnes, but the company did not say when that will be.
The company will pay up to 700 million yuan per year in taxes once the whole project is operational, according to the company.
Hao Peng, deputy secretary of the Chinese Communist Party regional committee in Tibet, said the project will promote economic development in Tibet and help meet China's soaring demand for non-ferrous metals.
Sun Zhaoxue, CNGG general manager, said the company invested 250 million yuan in work safety and environmental protection for the project.
CNGG, China's largest gold producer, has more than 1,300 tonnes of gold reserves, 8 million tonnes of copper reserves and 1.2 million tonnes of molybdenum reserves.
Posted by Claude Arpi at 4:23 PM