The privatisation of the CIA 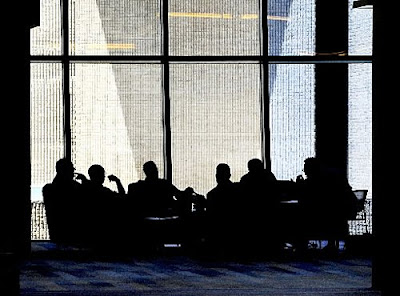 Reading this long article one understand better the blunders of the CIA and the wrong policies of the successive US Administrations. When you privatize your intelligence services, this is bound to happen.
Agents are no more working for the highest values/interests of the State but for their own pocket.
The latest wrong move is the foolish Af-Pak policy: the Obama's Administration pretends to fight terrorism in the West (Af) while defending terrorism in the East (Pak). This will lead nowhere. It is however in the 'contractors' interest' that the tamasha continues. They are getting richer by the day. In the meantime, Beijing is enjoying its 'all-weather' relation with Islamabad.
And India will keep being squeezed. The problem is that New Delhi has also its own 'contractors', often based in Washington. It is what was called the Great Game during the 19th century.

National Security Inc.
Top Secret America: A Washington Post Investigation
By DANA PRIEST AND WILLIAM M. ARKIN
The Washington Post
Wednesday, July 21, 2010
In June, a stone carver from Manassas chiseled another perfect star into a marble wall at CIA headquarters, one of 22 for agency workers killed in the global war initiated by the 2001 terrorist attacks.
The intent of the memorial is to publicly honor the courage of those who died in the line of duty, but it also conceals a deeper story about government in the post-9/11 era: Eight of the 22 were not CIA officers at all. They were private contractors.
To ensure that the country's most sensitive duties are carried out only by people loyal above all to the nation's interest, federal rules say contractors may not perform what are called "inherently government functions." But they do, all the time and in every intelligence and counterterrorism agency, according to a two-year investigation by The Washington Post.
What started as a temporary fix in response to the terrorist attacks has turned into a dependency that calls into question whether the federal workforce includes too many people obligated to shareholders rather than the public interest -- and whether the government is still in control of its most sensitive activities. In interviews last week, both Defense Secretary Robert M. Gates and CIA Director Leon Panetta said they agreed with such concerns.
The Post investigation uncovered what amounts to an alternative geography of the United States, a Top Secret America created since 9/11 that is hidden from public view, lacking in thorough oversight and so unwieldy that its effectiveness is impossible to determine.
To read the entire article (5000 words) click here.
Posted by Claude Arpi at 11:14 AM