The end of a world? 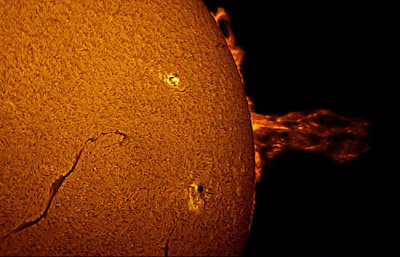 In the fall of 2012, China will witness a major leadership change during the 18th National Congress of the Chinese Communist Party. The present top leaders including President Hu Jintao, Premier Wen Jiabao and Chairman of the National People’s Congress Wu Bangguo are to retire. The Standing Committee of the Politburo will have 7 new faces (the present strength is 9). The process is said the most opaque in the world (it is clearer in North Korea where the Son always succeeds a Dear Leader). Will these tremendous solar explosion help to bring some ‘glasnost’ (transparency) in the proceedings in the Great Hall of People? End of 2012 is also said to be the end of a cycle in the Maya Calendar.Tremendous changes were expected by the Mesoamericans around that time. We have one and a half year to wait the results of all this.


Abrupt change 2012: problems with the Sun
by Ervin Laszlo on February 16, 2010
Physical changes in the intensity of solar radiation conspire with human impacts to stress the world system. Astronomers have noted that since the 1940s, and particularly since 2003, the Sun has become remarkably turbulent, with the exception of the last year or so. Solar activity is predicted to peak around 2012, creating storms of intensity unprecedented since the 1859 “Carrington event,” when a large solar flare accompanied by a coronal mass ejection flung billions of tons of solar plasma into the Earth’s magnetosphere.
Solar storms, capable of traveling at speeds up to 5 million miles per hour, could knock-out virtually every major technological infrastructure on the planet: transportation, security and emergency response systems, electricity grids, finance, telecommunications, including satellite and other wireless networks, and even household electronic equipment.
The solar storm of 1859 was the most powerful event of its kind in recorded history. On the 1st of September of that year the Sun expelled huge quantities of high-energy protons in a large flare that traveled directly toward the Earth, taking eighteen hours instead of the usual three or four days to reach our planet. It disrupted telegraph systems all over Europe and North America. Fires erupted in telegraph stations due to power surges in the wires; and the northern lights (aurorae borealis) were seen as far south as Florida.
The next solar storm on record, in March of 1989, melted the transformers of the HydroQuebec Power Grid, causing a nine-hour blackout that affected six million people in Canada. And the solar storms that reached the Earth between October 19th and November 7th 2003 disrupted satellites and global communications, air travel, navigation systems, and power grids all over the world. It also affected systems on the International Space Station.
The solar maximum forecast for 2012 could do greater harm than any before, since human life has become much more dependent on the global energy grid. According to “Severe Space Weather Events: Understanding Economic and Societal Impacts,” a National Research Council report issued in the spring of 2009 by the U.S. National Academy of Sciences, another Carrington event would induce ground currents that knock out 300 key transformers within 90 seconds and cut off power for more than 130 million people in the U.S. alone.  Its cost could be as high as 2 trillion dollars, and recovery time would be four to ten years.  An even worse impact would be felt in China, where the electrical grid is more vulnerable than in the West.
A major solar storm would cause the failure of electric power in most parts of the world. The above cited report of the National Academy of Science claims that this would have catastrophic consequences. People in high-rise apartments, where water has to be pumped up, would be cut off immediately. For most others drinking water would come through the taps for about half a day, but the flow would then cease without electricity to pump it from reservoirs. Transportation systems directly or indirectly dependent on electric power (which means practically all systems) would come to a standstill. Back-up generators would operate at some sites until their fuel ran out. For hospitals that would mean about 72 hours of essential care only services. Without power for heating, cooling and refrigeration, and with a breakdown in the distribution of medicines and pharmaceuticals, urban population would begin to die back within days.
Scientists forecast yet another disruptive event for the end of 2012: breaches in the Earth’s magnetic field. In the past this field protected living systems from the effects of solar storms and coronal mass ejections. Lately the magnetic field has diminished in intensity and holes and gaps have appeared. Scientists in South Africa measured cracks in the magnetic field the size of California, and in December of 2008 NASA announced that its Themis Project had found a massive breach that would allow a devastating amounts of solar plasma to enter the Earth’s magnetosphere.
The fluctuation of the magnetic field could also lead to the reversal of the planet’s magnetic poles. During the course of reversal the magnetic field would become still weaker, and the danger to life from solar and stellar radiation would greatly increase.
Another scientific report of relevance concerns the entry of our solar system into a highly energized region of space. This turbulent region is making the Sun hotter and stormier and has already caused climate change on other planets. According to Russian scientists the effects on Earth will include an acceleration of the magnetic pole shift, the vertical and horizontal distribution of ozone, and an increase in the frequency and magnitude of extreme climate events.
There is solid scientific evidence backing up the prophecy that the end of 2012 will be a turbulent epoch. Will we be ready for the abrupt shifts and disruptions it will bring, and ready to seize the opportunities that will open in their wake? We must now face this question. The answer to it is not yet in, but one thing is certain: we must wake up to both to the dangers and to the opportunities of the “WorldShift 2012” awaiting us.
Posted by Claude Arpi at 8:02 AM