I saw it with my own eyes 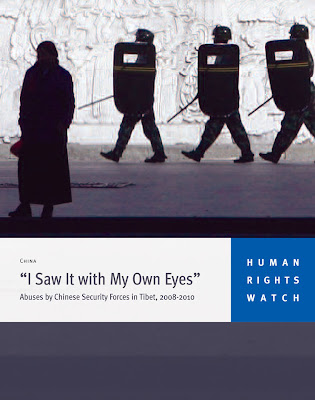 In India, we believe in "Satyamev Jayate" (the Truth will prevail).
The problem is that usually it takes a bit of time, but we keep faith that truth will slowly, but surely emerge.
This Report of Human Rights Watch brings some 'inconvenient' (for Beijing) truths on the '2008 incident' as the Chinese prosaically call it.
To read the Report, click here.


Report Reopens Questions on Tibet Crackdown
Human Rights Watch accuses Chinese authorities of using disproportionate force and “acting with deliberate brutality” in the aftermath of antigovernment protests in Tibet two years ago, in a report likely to reignite debate over Chinese rule of the region.
Human Rights Watch said its findings in the new report released today were based on interviews with some 200 people and official sources of information.
The police crackdown started after March 10, 2008 protests against Chinese rule turned into violent riots in Lhasa and other parts of Tibet and neighboring provinces. Officials said some 21 people were killed. Tibetan activists put the toll much higher.
After the protests, the government strictly limited outsiders’ access to Tibet, for example, only allowing a handful of foreign reporters in on tightly scripted government-run trips.
Researchers on the report say they were unable to confirm either version’s death toll because of the restricted access.
But they said their interviews revealed a widespread pattern of abuse and mistreatment of prisoners and called on Chinese authorities to reveal the total number of people detained, and release those still being held without charge.
Authorities have repeatedly defended their actions, saying they were acting within the law to prevent looting from getting out of hand, and have denied accounts they used deadly force in responding to protests.
Posted by Claude Arpi at 6:10 AM