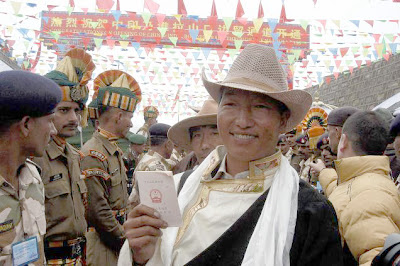 On May 2, the border will reopen between India and Tibet at Nathula in Sikkim.
Business is not flourishing.
An article in iSikkim reported: "The fifth edition of Indo-China trade through the Nathu-La border in 2010 recorded absolute zero import."
At the same time, a few hundreds kilometers westwards the trade is with Nepal is increasing (though one-way only).
The website China Tibet Online affirms that the "total volume of cross-border petty trade between Tibet and Nepal has increased remarkably in the first quarter of 2011".
Lhasa Customs figures show that the overall petty trade value amounted to 131 million US dollars, 62.3 % higher than the figure over the same period of last year, accounting for 98.4 % of the total cross-border trade value.
Of the total petty trade volume, imports reached up to 748,000 US dollars, dropped by 16.2 % while exports took up 130 million dollars, increased by 63.2 %."
Like in the case of India and the United States, the trade is heavily tilting in China's favour, but the Nepalis do not seem to mind too much.
An amusing story about the term 'petty trade'. At the time of signing the Panchsheel Agreement in 1954 and despite the nice preamble (The Five Principles), the two delegations were miles apart.
A telling incident shows how little confidence there was between India and China.
In the Hindi version of the Agreement, the Indian translators had written 'chhota mota vyapar' for ‘petty trade’.
'Chhota' means ‘small’ and 'mota', ‘fat’ or ‘big’. The Chinese Hindi expert could not reconcile the two contradictory words. He did not realise that it was a widely used idiomatic Hindi phrase for ‘petty’. He thought that there was some trick behind the term. It took two weeks to convince the Chinese that the term chhota mota was correct. They finally accepted it only after having cross-checked with their embassy in Delhi.
The problem is the trade is 'chhota' for India and 'mota' for the Chinese side. 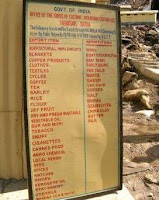 Nathu La opens from May 2 for trade
April 20, 2011
iSikkim
Gangtok: The sixth edition of Nathu-la border trade with Tibet Autonomous Region (TAR) of China will start on May 2 this year. It will continue till November 30 when the pass at 14,420 ft closes down for winte. Under the bilateral agreement between India and China, there are 29 exportable items. Sikkim traders are allowed to export them to TAR. But the Indian business community can import only 15 items. The trade through the Nathu La pass started in 2006.
The fifth edition of Indo-China trade through the Nathu-La border in 2010 recorded absolute zero import. In 2009 also the Nathu-La border trade closed for the season recording zero import.
As per the official record 2010 saw exports worth a little over Rs 4 crore. Canned foods, utensils, textiles, copper items, vegetable oil, tea, cigarette, coffee, misri, and blankets have been the most popular export items.
ist of items allowed for trade across Nathu La border
List of items allowed for trade across Nathu La border (Pic Courtesy: The Hindu)
China’s In-charge of Tibetan Autonomous Region (TAR), Ms Kesang Diki said that the reason for zero import was because of the non-feasible list of items for trade across the historic post. She requested the Indian Government to expanding the trade list so as to cater to today’s market demands.
As per the bilateral agreement in 2006 only 29 items can be exported to TAR from the Indian side while the Chinese traders can export only 15 items. Most of these items listed in the schedule are obsolete and do not have commercial value, a fact both the Chinese and the Sikkimese traders have highlighted in the past four years.
The Chinese traders, however, did brisk business by selling non-permitted items such as blankets, woollen jackets and carpets to tourists and locals. Custom officials said it was difficult to check imports of such items in the absence of adequate staff.
Posted by Claude Arpi at 6:37 AM