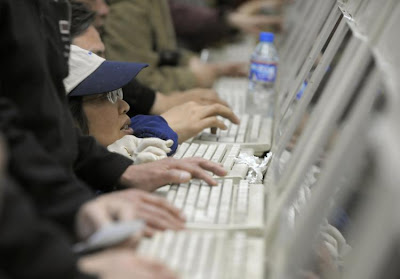 45% of Chinese netizens encountered virus in 2010. It is a lot! Chinese 'experts' probably practice the Art of Hacking on their own countrymen.
For Beijing, how to control 450 millions of netizens is today the main problem for the regime, Great Firewall or not.
The new  White Paper on National Defence states that the goals and tasks of China's national defense are (amongst others)
— Safeguarding national sovereignty, security and interests of national development. China's national defense is tasked to guard against and resist aggression, defend the security of China's lands, inland waters, territorial waters and airspace, safeguard its maritime rights and interests, and maintain its security interests in space, electromagnetic space and cyber space.
It is, of course, also tasked "to oppose and contain the separatist forces for 'Taiwan independence', crack down on separatist forces for 'East Turkistan independence' and 'Tibet independence', and defend national sovereignty and territorial integrity."
But more importantly:
— Maintaining social harmony and stability. ...Taking the maintenance of overall social stability as a critical task, the armed forces resolutely subdue all subversive and sabotage activities by hostile forces, as well as violent and terrorist activities. The Chinese armed forces carry on the glorious tradition of supporting the government and cherishing the people, strictly abide by state policies, laws and regulations and consolidate the unity between the military and the government and between the military and the people".
It is not an easy task to control 450 millions netizens to 'maintain social harmony and stability".