The Agreement on Measures for the Peaceful Liberation of Tibet 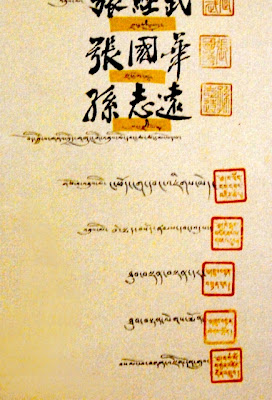 It is surprising that the Second Tibetan National General Meeting is scheduled to be concluded on May 23. This date will mark the 60th anniversary of the signature between China and Tibet of an ‘Agreement on Measures for the Peaceful Liberation of Tibet’. It is also known as the 17-Point Agreement.
In his memoirs, the Dalai Lama has said that the Agreement had been signed 'under duress' and that the seals on the Agreement would have been forged.
When he crossed the Indian border in March 1959 and reached Tezpur in Assam, he denounced the Agreement. He stated (using the third person) that in any case, the Chinese never respected the accord:

Later on June 20, 1959, in a press conference in Mussorie, the Dalai Lama was more explicit. He explained:


To understand and appreciate the significance and implication of the recent tragic happenings in Tibet, it is necessary to refer to the main events which have occurred in the country since 1950.It is recognised by every independent observer that Tibet had virtually been independent by enjoying and exercising all rights of sovereignty,whether internal or external. This has also been impliedly admitted by the Communist Government of China, for the very structure, terms and conditions of the so-called agreement of 1951 conclusively show that it was an agreement between two independent and sovereign States. It follows, therefore, that when the Chinese armies violated the territorial integrity of Tibet they were committing a flagrant act of aggression. The agreement which followed the invasion of Tibet was also thrust upon its people and government by the threat of arms. It was never accepted by them of their own free will. The consent of the government was secured under duress and at the point of the bayonet. My representatives were compelled to sign the agreement under threat of further military operations against Tibet by the invading armies of China leading to utter ravage and ruin of the country. Even the Tibetan seal which was affixed to the agreement was not the seal of my representatives but a seal copied and fabricated by the Chinese authorities in Peking, and kept in their possession ever since.

It is therefore a strange coincidence that the General Meeting will conclude the day the Chinese authorities will be celebrating the 'Liberation of Tibet'.

Retirement of Dalai Lama: Meet in May
Naresh Kumar Sharma, TNN | Apr 1, 2011, 03.06am IST
DHARAMSHALA: The second Tibetan national general meeting would be held at Dharamshala from May 21 to 23 to deliberate on Dalai Lama's formal proposal to retire from political duties.
The Tibetan parliamentary secretariat said the proceedings of the general meeting were finalized on Wednesday at a meeting of the members of the exiled Tibetan government's cabinet (kashag) and the parliament's standing committee, presided over by the speaker.
The general meeting will be held in accordance with the final resolution passed during the 11th session of the parliament to follow up the Dalai Lama's proposal to devolve political authority to a democratically elected Tibetan leadership.
Regarding the composition of the participants, it said the de facto prime minister of Tibet, members of the Kashag, former ministers (kalons), elected prime minister of the 14th kashag, members of parliament, former members of parliament, elected members of the 15th Tibetan parliament, Dharamshala-based officials above joint secretary level, one representative each from the local assemblies and one each   from Tibetan settlements which do not have any local assemblies, one member each from Bod Rawang Denpai Legul Tsogchung, six representatives each from the four schools of Tibetan Buddhism and Bon religion, one member each from the overseas Tibetan Associations, two members each from the Tibetan non-governmental organizations and one representative each from autonomous institutions, 50 voluntary participants comprising scholars, experts and social activists, 30 from India, Nepal and Bhutan and 20 from other countries can attend the general meeting.
The Tibetan parliament will apprise the Dalai Lama about the final recommendations of the general meeting on May 24, 2011.
Accordingly, recommendations concerning the amendment of the charter will be tabled in an additional session of the 14th Tibetan parliament for final approval, it added.
Posted by Claude Arpi at 6:12 AM