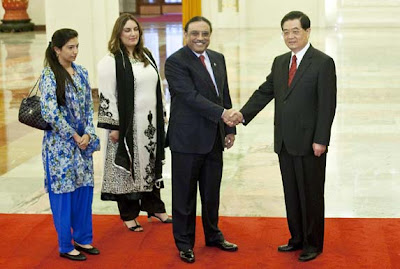 In August 2010, Selig Harrison, a former foreign correspondent in India (he interviewed Nehru after the 1962 Sino-Indian conflict) wrote in The New York Times, an Op-Ed entitled China's Discreet Hold on Pakistan's Northern Borderlands. He argued:


While the world focuses on the flood-ravaged Indus River valley, a quiet geopolitical crisis is unfolding in the Himalayan borderlands of northern Pakistan, where Islamabad is handing over de facto control of the strategic Gilgit-Baltistan region in the northwest corner of disputed Kashmir to China.
The entire Pakistan-occupied western portion of Kashmir stretching from Gilgit in the north to Azad (Free) Kashmir in the south is closed to the world, in contrast to the media access that India permits in the eastern part, where it is combating a Pakistan-backed insurgency. But reports from a variety of foreign intelligence sources, Pakistani journalists and Pakistani human rights workers reveal two important new developments in Gilgit-Baltistan: a simmering rebellion against Pakistani rule and the influx of an estimated 7,000 to 11,000 soldiers of the People’s Liberation Army.
China wants a grip on the region to assure unfettered road and rail access to the Gulf through Pakistan. It takes 16 to 25 days for Chinese oil tankers to reach the Gulf. When high-speed rail and road links through Gilgit and Baltistan are completed, China will be able to transport cargo from Eastern China to the new Chinese-built Pakistani naval bases at Gwadar, Pasni and Ormara, just east of the Gulf, within 48 hours.
Many of the PLA soldiers entering Gilgit-Baltistan are expected to work on the railroad. Some are extending the Karakoram Highway, built to link China’s Sinkiang Province with Pakistan. Others are working on dams, expressways and other projects.

At that time, the Chinese Foreign Ministry spokeswoman Jiang Yu affirmed: “The story that China has deployed some military in the northern part of Pakistan is totally groundless and out of ulterior purposes. Some people are making fabrications to destroy relations between China, Pakistan and India but their attempt will arrive nowhere".
While the chill between Washington and Islamabad increases, the Chinese are more and more present in infrastructure projects in Pakistan as this article of Reuters shows.
This should worry India.
But can India worry for anything apart from cricket?

China Eximbank to lend Pak $1.7bn for train system
Reuters
April 28, 2011
ISLAMABAD: The Export-Import Bank of China will loan Pakistan $1.7 billion to develop a city-wide train system in the eastern city of Lahore, a senior Pakistani government official said on Wednesday.
The 15-year loan will be disbursed in the next five years, and negotiations with Eximbank are under way to finalise other details, Khawaja Ahmed Hassan, chairman of the Lahore Transport Company (LTC), said.
“The bank agreed to lend us the money with a two-year grace period, and our aim is to get it at six per cent interest,” he told Reuters.
The Punjab government recently agreed to award the 27 km (16.7 mile) train line contract project to the Chinese company China North Industries Corp (Norinco). In 2008, a French company had estimated the cost of the project at $2.4 billion.
The Chinese “were very kind and they brought down the cost of the project to $1.7 billion,” Hassan said.
He said the project was likely to begin by the end of 2011.
Lahore, the capital of Punjab province, Pakistan’s most populous and prosperous province, is home to more than five million people.
Officials expect the new transport system, the first of its kind in the country, will substantially decrease road traffic.
“There will be a big change. If we are able to bring here the system which we saw in China, thousands of vehicles (will) eventually go off the road,” Hafiz Nauman, a provincial lawmaker and senior member of the LTC, said.
He said another Chinese company will supply 111 buses to the city in June.
Seen as an “all-weather friend” to Pakistan, China has invested heavily in infrastructure development, particularly in the strategic and mineral-rich southwest, bordering Iran and Afghanistan.
China Three Gorges Corp, China’s largest hydropower developer, is ready to invest $15 billion in Pakistan’s troubled energy sector, an investment that could add 10,000 megawatts to Pakistan’s main grid over the next 10 years, a senior company official told Reuters in an interview on April 7.
China is a main supplier of military and defence hardware to Pakistan, and has helped the country build nuclear power plants.
Posted by Claude Arpi at 6:49 AM