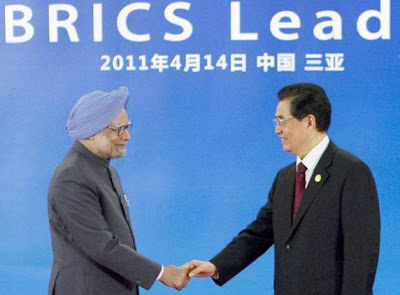 'Opacity' is a key-word in Chinese politics.
Why suddenly last year, the leadership found new 'core issues' to fight for and why these core issues have suddenly been dropped from Beijing's agenda, is a matter of pure speculation.
One can always say that the 'generals' have been put back in their places (or send back to their barracks), at least for the time being.
It does not explain why they had come out in the first place.
One point seems certain, the power struggle for the 2012 leadership change has started.
Another intriguing issue!
Why did Vice President Xi Jinping praise the departing U.S. ambassador, Jon Huntsman, calling him 'an old friend of the Chinese people'?
Huntsman had earlier challenged the CCP's clampdown on protesters and sided with Chinese dissidents.
When Huntsman called on him with a delegation of US Senators, Vice President Xi said: "I must take the opportunity to say a few words about Ambassador Huntsman. His term is coming to an end and we are reluctant to see him go. You are an old friend of the Chinese people".
Xi continued: "Let me express our appreciation for your contributions. We will never forget what you have done, I hope that wherever you work in the future that you come back to China often and continue to make contributions to friendship and cooperation between our two people."
The same Huntsman was earlier criticized the Chinese government when he was seen with demonstrators in a crowd that gathered on Beijing's Wangfujing shopping street. Online messages had called for a pro-democracy gathering inspired by the uprisings in Tunisia and Egypt.
Is the praise of Huntsman part of a 'damage-control' policy or is Xi just preparing his Presidency? Future will tell us.
The 'damage-control' was also apparent when President Hu met Dr Manmohan Singh during the BRICS meet.
The 'Kashmir' visa issue seems to have been dropped for the time being.

Hu Jintao deploys his damage-control spin doctors; Now if only the generals would cooperate
East-Asia-Intel.com, April 13, 2011
INSIDE CHINA
Willy Lam
Call it damage-control diplomacy. Since President Hu Jintao's American visit in January, Chinese diplomats and "official" academics have been trying to reassure the world of Beijing's non-aggressive, "peaceful development" diplomatic posture.
Throughout 2010, Beijing alienated a number of its Asia-Pacific neighbors through measures including revving up territorial disputes with countries including Japan, Vietnam, Malaysia and the Philippines. Relations between China and the U.S. also became tense in the wake of large-scale war games that the American Navy and Air Force were holding with Asian countries in China's backyard.
Spearheading Beijing's fence-mending effort is well-known Peking University foreign-policy professor Wang Jisi, who is also a senior member of President Hu's personal think tank. In an article in the mass-circulation Global Times newspaper and Web site earlier this week [April 13], Wang pointed out that China had no ambition of displacing the U.S. as the world's No. 1 power.
"It's unrealistic to think that China can reach parity with the U.S. in one to two decades," Wang pointed out. "The development of China's soft power is particularly lagging behind. China's voice is weak within international opinion. It's far from 'world No. 2.' "
In the current issue of Foreign Affairs, Wang further pointed out that for the foreseeable future, the focus of the Chinese Communist Party (CCP) leadership will continue to be economic development and maintaining domestic harmony. Wang in particular criticized unnamed commentators for making inflammatory statements about extending of China's "core interests" to cover the South China Sea and other parts of Asia.
Wang indicated that apart from Taiwan, "the Chinese government has never officially identified any single foreign policy issue as one of the country's core interests. Last year, some Chinese commentators reportedly referred to the South China Sea and North Korea as such, but these reckless statements, made with no official authorization, created a great deal of confusion," he added.
Other liberal academics, including well-known international relations expert Professor Chu Shulong at Tsinghua University, have blasted People's Liberation Army generals for inappropriately "intervening in China's foreign and security-related policymaking."
It remains a fact, however, that within China's labyrinthine foreign-policy establishment — which is headed by the CCP Leading Group on Foreign Affairs (LGFA) — the generals are having a bigger say. For example, President Hu, who chairs the LGFA as well as the party's Central Military Commission, is on occasion known to have sided with PLA representatives rather than career diplomats on issues including relations with the U.S., Japan, Taiwan, and in particular, North Korea.
Moreover, the diplomats — as well as government advisers such as Professors Wang and Chu — are powerless to prevent the generals from aggressively flexing their muscle. A classic example was the test-flight of the Jian-20 stealth jetfighter on January 11 this year, the same day that visiting Defense Secretary Robert Gates had his meeting with President Hu.
In the past fortnight, official Chinese papers and Web sites have run pictures of what is billed as China's "first aircraft carrier," which is actually a remodeled version of the Varyag flattop that the PLA bought from Ukraine a few years ago. While some military analysts believe that news about the Varyag was put out to distract attention from the couple of indigenously designed aircraft carriers that the PLA Navy is building, the graphic photographs have served to demonstrate the generals "commitment to hard-power projection" and to closing the military gap with the U.S.
The generals' clout is also tipped to grow after "crown prince" Vice-President Xi Jinping takes over power from President Hu at the 18th CCP Congress scheduled for next year. Xi, the putative Head of the Gang of Princelings (a reference to the offspring of party elders), is on very friendly terms with the more than 100 princeling PLA officers who hold the rank of major-general or above. Xi is expected to replace Hu as CMC Chairman — China's equivalent of commander-in-chief — at or soon after the 18th Congress.
(Willy Lam is a Hong Kong-based China scholar and journalist specializing in Communist Party politics and foreign policy.)
Posted by Claude Arpi at 6:07 AM