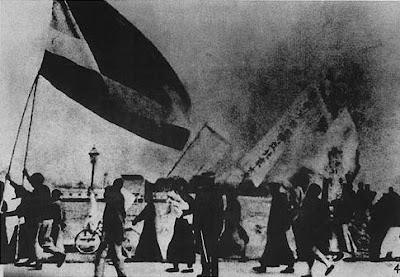 Beijing is nervous.
Today, the last thing that the Communist regime wants to hear is the word 'revolution'.
Even if it is their own.
In the present circumstances, the leadership believes that it is too risky to discuss the modern history of the Middle Kingdom, it may trigger the fall of the present dynasty.
Text books might have been rewritten in China: no Xinhai Revolution, no May 4 Student's Revolution!
What about the Great Prolatarian Cultural Revolution?
Mr. Hu Jintao probably does not remember Chairman Mao's words: "Revolution is not a tea party. It is not like writing an essay, painting or embroidering flowers,... revolution is an act of violence, it is the violent overthrow of one class by another..."
Revolution has occurred in China, whether it was for good or bad is another issue. To obliterate this past is wrong, it just proves that the leadership lives in fear to be questioned ...or to be violently overthrown.

Beijing’s Communist Youth League Cancelled Debate Due to its Sensitivity
Sources: Radio Free Asia April 13, 2011
The Beijing Communist Party Youth League recently canceled a debate forum that was to be given in memory of the 100th anniversary of the “1911 Revolution,” even though students from 16 universities in Beijing and Tianjin were expected to participate. Experts suggest that the cancellation was due to the sensitivity of the topic because it touched the subject of “revolution” and also used the words “college students” and “rally.”
Communist Party officials have always considered these to be unstable factors.
Hu Xingdou, a professor of economics at the Beijing Institute of Technology, said he was surprised by the cancellation of the debate but could understand the reason. “The memory of the 1911 Revolution could indeed awaken people’s awareness of revolution. College students have historically been the driving force behind China’s revolutions, including the 'June 4th' student movement. The government is on a high alert for them, just as it is for the Jasmine Revolution."
According to Wikipedia, the “1911 Revolution” (or Xinhai Revolution) began on October 10, 1911, with the Wuchang uprising, and ended on February 12, 1912, with the abdication of Emperor Puyi. It resulted in the fall of the Qing Dynasty and marked Sun Yat-sen as the Founding Father of the Republic of China.
Posted by Claude Arpi at 6:58 AM