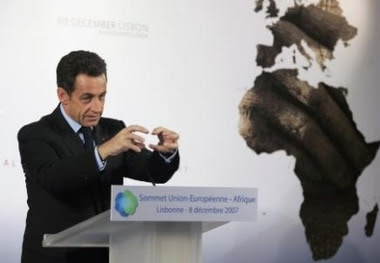 Many Indian friends have been asking me: “What is happening to Sarko? He is trying to emulate Napoleon Bonaparte? What is this new Campaign of Africa?”
The French President’s size makes for easy comparison between the Emperor and Carla Bruni’s husband, but it does not explain why in the recent times, Sarkozy has been in such a belligerent mood.
In the past months, world events have taken an unexpected turn. Who could have expected popular revolutions against Presidents Ben Ali or Mubarak a few months back?
Events went so fast that the French Government was caught on the wrong foot. The Minister of Foreign Affairs, Ms Alliot-Marie had gone holidaying to Tunisia, enjoying the hospitality from a close associate of President Ben Ali, till recently a great friend of France. Alliot-Marie eventually resigned, but the episode was tough on Sarkozy, barely 14 months before the Presidential elections. His popularity had reached a historical low with a large majority of French disapproving of his policies.
The Libyan ‘revolution’ against a psychopathic tyrant as well as the ‘civil war’ in Ivory Coast where the outgoing President Laurent Gbagbo lost the elections against his opponent Alassane Ouattara, but refused to vacate his seat, were the ideal occasions to show La Grandeur (greatness) of France.
When the situation started to degenerate into a bloodbath in Ivory Coast, Sarkozy considered it politically safe to intervene, particularly after the UN Security Council adopted Resolution 1975 authorizing the use of force to get Gbagbo out of the way.
With Ban-ki-moon personally writing to the French President on April 3 to authorize Force Unicorn to “jointly conduct operations with the UNOCI”, to arrest Gbagbo, it became an ‘easy’ affair.
A French defence expert wrote: “If you take the example of a Bakers’ shop. The French had the recipe, they prepared the cake, baked it and Ouattara’s troops were left to put the cherry (arrest Gbagbo) and eat the cake”.
In a way, it was a victory for Sarkozy who had showed that he was a great defender of ‘democracy’ and ‘human rights’. He could further argue that this intervention will be a precedent for other African nations which go to the polls in 2011. The UN-led operations in Abidjan could act as a deterrent to other leaders who may be tempted to refuse to recognize election results. Therefore Merci Sarko!
In Libya, the situation is more complicated and the stakes are higher.
Let us remember that in 2007, Gaddafi planted his tent not far from the Elysees Palace where Sarkozy lives; he was called a bastion of secularism in the Arab world and a great friend of France. When Rama Yade, the pretty junior minister of Foreign Affairs said that “tyrants were wiping their bloodied boots on the doormats of France”, she was severely reprimanded by the Presidency and eventually dismissed. Her popularity improved, while Sarkozy’s plummeted. The President probably had this in mind (as well as the Alliot-Marie Tunisian blunder) when he decided to push for the UN resolution on Libya.
If the French President’s advisors thought it would be easy, they were wrong. Three weeks after the first strikes, Gaddafi is still around. His troops have been able to adapt remarkably well to the destruction of the air-defenses. They now use guerilla warfare with ordinary vehicles indiscernible by the NATO satellites. While the pro-Gaddafi troops have a leader and a military tactic, it is not the case for the insurgents.
Despite the grand show orchestrated by Bernard-Henri Levy, the French philosopher-turned White Knight who advised Sarkozy to go to war, the ‘rebels’ are not a homogenous group.
A French defence expert wrote: “We French have too much contempt for our enemies. Did we expect that they will just run away after the first passage of a fighter plane in the sky?”
The other difficulty is that the coalition is extremely fragile, with the United States having already left the boat and others increasingly reluctant to go for Gaddafi.
Sarkozy, the Chef de guerre, is lonely these days; though the British and the Italians are still on board, others coalition members play a minor role while nations (such as the BRICS) are dead against any intervention.
In this nightmarish situation, there is a positive aspect for Paris. The Rafale has done quite well, much better than the Eurofighter, its rival in the 126 MMRCA tender by the Indian Air Force. The Eurofighters remained on their bases in UK and Italy, they were not ‘polyvalent’ enough according to defence sources.
Now the real issue remains: how can Sarkozy come out of the quagmire without losing face and points in the surveys? Difficult.
Posted by Claude Arpi at 5:34 AM