Not only in POK, in Nepal too 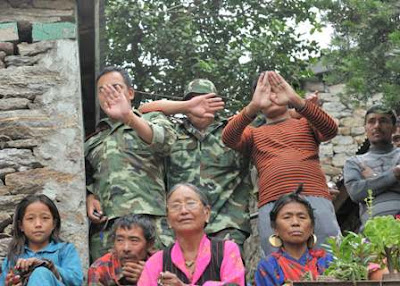 The Chinese Foreign Ministry Spokesperson, Hong Lei denied the presence of the PLA troops in POK. Unfortunately, Chinese soldiers are not only present in POK, but also in large number in Nepal. A friend recently sent me these pictures taken in a small mountain village of Nepal. Apparently the Chinese were not too happy to be photographed.
What is Delhi doing about this? The Minister will probably say that South Block is closely monitoring the situation. 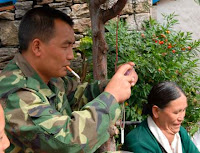 Apr 7, 2011
BEIJING: China on Thursday dismissed reports about the presence of Chinese troops in Pakistan occupied Kashmir as "baseless and ridiculous".
The statement comes ahead of the planned meeting between Indian Prime Minister Manmohan Singh and Chinese president Hu Jintao in mid-April.
Chinese Foreign Ministry Spokesperson, Hong Lei brushed aside a statement by a Indian army general, who recently expressed worry about the China-Pakistan build-up with Chinese troops being present in POK areas. The issue is likely to come up during the meeting of leaders of the two countries on the sidelines of the BRICS summit to be attended by Brazil, Russia, India, China and South Africa in the Chinese coastal city of Sanya in April 13-15.
The Indian government had formally raised the issue with China last year after reports in the US media suggested a large presence of Chinese forces in the Gilgit-Baltistan areas of POK.
Beijing reacted by saying that its personnel were present in POK only for the purpose of providing relief to victims of massive floods that affected the areas.