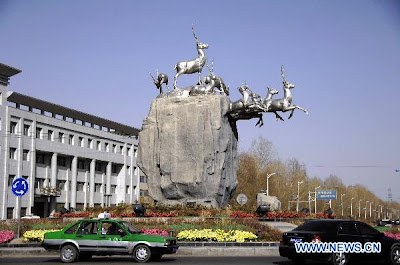 When the Chinese troops entered Tibet in 1951, the first task assigned to the People's Liberation Army was to build a network of roads.
This did not prove enough to 'liberate' Tibet whose populations remain resentful, even after 60 years.
A few years ago, the Chinese government decided to continue on the 'development' track. As the result, in 2006, Beijing opened the first railway line to Lhasa (more than 8 millions visitors are expected on the Roof of the World in 2011, using the train).
As the Central Government constructed the road between its 'provinces' of Tibet and Xinjiang in the 1950's, Beijing has begun to lay down a railway line between the two nationalities' areas.

It will help, among other things, to carry troops, in case it is needed, from Lhasa in Tibet to Urumqi in Xinjiang (or vice-versa) in a shorter time.
As I mentioned in an earlier posting, Beijing has decided to invest huge amounts of money to implement some 'social management' schemes for the masses; in other words, to bring 'harmony' and control the populations in the Mainland and in 'minorities' areas.  The 2011 budget for this scheme is 95.18 billion dollars, 3.55 billions higher than the PLA's allocation.
Though the cost of the railway Tibet-Xinjiang is not included in this budget, the fast train will go a long way to help the 'management' of these provinces.
As a China Academy of Railway Sciences official told Xinhua: "it will be difficult to make money from building such a line. It's more of a political thing, he said. It's more about national defense and ethnic unity." No further comment is required!

China takes fast rail ambition to new heights
Xinhua
2011-04-10
Deep in the Qilian Mountains in northwest China, early spring is marked with heavy snow and freezing temperatures. In this desolate place in Qinghai Province, at an altitude of 3,700 meters above sea level, migrant worker Li Bingui is seldom separated from his jackhammer, which moves his whole body as he works to break apart bedrock.
Li, along with more than 1,800 other workers, are at the mercy of a ruthless environment as they construct the world's highest high-speed railway.

HIGHER, TOUGHER
Li and others are carving out a 9,490-meter tunnel through the rugged mountain range, one of the most difficult parts of the building the line to link Lanzhou, capital of Gansu Province, with Urumqi, capital of northwest China's Xinjiang Uygur Autonomous Region.
The 1,776-kilometer second line of Lanxin Railway runs across Gansu and Qinghai provinces to Xinjiang, traversing the wind ravaged Gobi Desert.
Started in late 2009 and scheduled to be completed in 2015, the line is designed for trains traveling at up to 300 kilometers per hour, much faster than the current 120 kilometers per hour on the existing line, cutting travel time between Lanzhou and Urumqi to about six hours.
Ren Shaoqiang, chief engineer with the China Railway 20th Group Co., Ltd., which is in charge of the construction, told Xinhua that compared with the Qinghai-Tibet plateau railway and the existing line between Lanzhou and Urumqi, construction of this fast rail line is more challenging.
Take the tunnel project for example. There's no precedent to draw from, said Ren, who also played a significant role in building the Qinghai-Tibet Railway, the highest rail link in the world.
We have to make innovations, just like when we worked on the Fenghuoshan Tunnel of the Qinghai-Tibet Railway.
In the past year or so, engineers have worked with researchers from several universities in China on natural disaster forecasting, water discharge, measuring of wall rock transfiguration, among other things.
Other worries are more immediately pressing, such as the lack of oxygen in the air because of the high altitude, which poses a threat to the health of workers.
Zhang Hong, a director at the site, said natural oxygen content in the tunnel is only around 65 percent of that in low-lying areas.
Besides, from October to June, the mountain is frequently covered by ice and snow, Zhang added.
Construction worker Wu Xuelin said working on the tunnel project is far more stressful than working on similar projects in coastal areas like in Shandong Province or Shanghai.
I could not adapt well at the beginning, suffering headaches, nausea, and had difficulty sleeping, Wu said.
The company has stepped up safety measures to better protect workers, providing them with oxygen tanks and setting up rooms at cave exits for workers to inhale oxygen. It has also built oxygen-generating stations to provide more oxygen in the tunnel.
Live video surveillance and alarm systems have also been set up.
We only need to switch on a computer and log in to our accounts to know what's happening in the tunnel, even if we are thousands of kilometers away, Ren said. We can also remotely control operations.
Despite all these measures, Guo Yuhong, Secretary of the Communist Party of China and Union Committee for the Qilian Mountains Tunnel, said, Under such conditions, nobody can stand a high workload for a long time.
Guo, 44, has been stationed at the construction site since last year, and his hair has turned gray during that period of time.

MORE EXPENSIVE, MORE CONTROVERSIAL
According to Ren, building the line through difficult terrain like in the Qilian Mountain area requires twice as much investment compared with similar high-speed line construction on low-level flat areas.
Wages for construction workers is also double, he said.
For regular high-speed rail lines with a designed speed of 350 kilometers an hour, construction costs can reach 100 million yuan (about 15.15 million U.S.dollars) per km, much higher than lines designed for allowing trains to travel at a speed of 200 kilometers per hour.
Lanxin Railway has a planned investment of more than 140 billion yuan in total, but the actual figure is yet to be revealed.
The project, designed as a passenger route, will make way for the existing Lanxin Railway to be used exclusively for freight.
Analysts are divided over whether the benefits outweigh the costs of building high-speed lines in the ecologically fragile western regions.
Some say higher construction costs will only push up ticket prices and, like other high-speed lines in coastal areas, might not be much favored by many passengers. Others take it as an effective means to develop the economy in the generally under-developed regions.
A senior researcher with the China Academy of Railway Sciences told Xinhua, on condition of anonymity, that it will be difficult to make money from building such a line. It's more of a political thing, he said. It's more about national defense and ethnic unity.
The new railway is expected to facilitate transport of energy resources from the vast desolate northwest to other regions of the country.
Take Xinjiang for example rich in oil, coal and natural gas reserves, the region is aiming to supply more of its resources to other areas in the coming five years.
Wang Tieshan, a PhD of economics at the Xi'an Jiaotong University, said high-speed railways are vital for closer links between cities in the west regions as they are usually far apart.
So far, several provinces and regions in the west, including Shaanxi Province in the northwest and Guizhou in the southwest, have laid out ambitious plans for high-speed rail construction over the next five years.
Currently, high-speed rail has linked Xi'an, capital of Shaanxi, with Zhengzhou, capital of central China's Henan Province. More such links between Xi'an and other west cities like Chengdu and Yinchuan are either under construction or in the planning.
At the political sessions held in early March, high-speed rail remained one of the hottest topics among national legislators and political advisors, particularly as the high-growth industry was shrouded in uncertainties following the sacking of former railway minister Liu Zhijun in February on suspicion of graft.
Sheng Guangzu, the new railway minister, said Liu's case was only an individual one and that China would continue to develop the industry in the coming years in accordance with the country's mid-and-long-term railway network plan.
Under China's economic master plan unveiled in March for the next five years, China aims to have more than 16,000 kilometers of high-speed railway by 2015. Currently, more than 8,000 kilometers of high-speed rail line are in operation, already the most in the world.
As to concerns about the massive debts caused by high construction costs and low occupancy rate due to expensive ticket prices, Sheng said the debt ratio of around 56 percent is normal and controllable.
Sheng also has pledged strict and high quality standards on the construction of high-speed rails to ensure safety.
However, legislators and political advisors have called for a restraint on the expansion of the high-speed rail network to avoid over-investment driven by an irrational pursuit for speed.
Political advisor Feng Pei'en suggested that new railway construction plans be made public to solicit feedback and that decisions be made based on objective analysis of passenger flows by air, rail and road.
Zhuang Wei, another political advisor, argued that China should focus on building railways with speeds at around 250 kilometers per hour because those at higher than 300 kilometers an hour are not only much more expensive but also tend to produce more pollution.
Posted by Claude Arpi at 7:24 AM