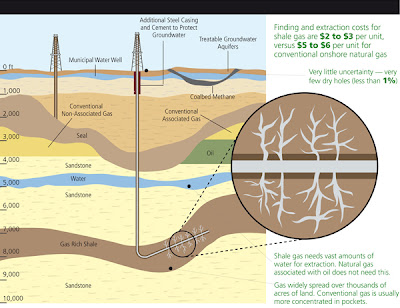 While a debate is raging in Europe, and more particularly in France, whether the exploitation of shale gas is safe or not, China has decided to go for this relatively new source of energy, extensively used in the United States since a few years.
A long article in The New York Times (Regulation Lax as Gas Wells’ Tainted Water Hits Rivers) explains: "


The gas has always been there, of course, trapped deep underground in countless tiny bubbles, like frozen spills of seltzer water between thin layers of shale rock. But drilling companies have only in recent years developed techniques to unlock the enormous reserves, thought to be enough to supply the country with gas for heating buildings, generating electricity and powering vehicles for up to a hundred years.
So energy companies are clamoring to drill. And they are getting rare support from their usual sparring partners. Environmentalists say using natural gas will help slow climate change because it burns more cleanly than coal and oil. Lawmakers hail the gas as a source of jobs. They also see it as a way to wean the United States from its dependency on other countries for oil.
But the relatively new drilling method — known as high-volume horizontal hydraulic fracturing, or hydrofracking — carries significant environmental risks. It involves injecting huge amounts of water, mixed with sand and chemicals, at high pressures to break up rock formations and release the gas."

Since the projection of a documentary Gasland on the extraction methods, shale gas has become highly controversial.
Another report from Reuters China set to unearth shale power goes into detail about China's efforts to get the new technology. It states "China has spent billions in its hunt for energy across the globe, but it may have untold riches in its own backyard."
Not only the extraction of the shale gas is extremely polluting for the aquifers, but according to some recent scientific studies, it could provoke earthquakes.
A scientific report "Potential Connection Between Earthquakes and Saltwater Injection" says:


A study of seismic activity near Dallas/Fort Worth International Airport by researchers from SMU and UT-Austin reveals that the operation of a saltwater injection disposal well in the area was a "plausible cause" for the series of small earthquakes that occurred in the area between October 30, 2008, and May 16, 2009.

Two Injection Methods Used in Gas Production
The incidents under study occurred in an area of North Texas where the vast Barnett Shale geological formation traps natural gas deposits in subsurface rock. Production in the Barnett Shale relies on the injection of pressurized water into the ground to crack open the gas-bearing rock, a process known as "hydraulic fracturing." Some of the injected water is recovered with the produced gas in the form of waste fluids that require disposal.
The earthquakes do not appear to be directly connected to the drilling, hydraulic fracturing or gas production in the Barnett Shale, the study concludes. However, re-injection of waste fluids into a zone below the Barnett Shale at the nearby saltwater disposal well began in September 2008, seven weeks before the first DFW earthquakes occurred and none were recorded in the area after the injection well stopped operating in August 2009. The largest of the DFW-area earthquakes was a 3.3 magnitude event reported by the USGS National Earthquake Information Center.

Faults Near the Injection Site
A state tectonic map prepared by the Texas Bureau of Economic Geology shows a northeast-trending fault intersects the Dallas-Tarrant County line approximately at the location where the DFW quakes occurred. The study concludes, "It is plausible that the fluid injection in the southwest saltwater disposal well could have affected the in-situ tectonic stress regime on the fault, reactivating it and generating the DFW earthquakes."


Field Investigations and Non-Felt Earthquakes
An SMU team led by seismologists Brian Stump and Chris Hayward placed portable, broadband seismic monitoring equipment in the area after the earthquakes began. The seismographs recorded 11 earthquakes between Nov. 9, 2008 and Jan. 2, 2009 that were too small to be felt by area residents. Cliff Frohlich and Eric Potter of UT-Austin joined the SMU team in studying the DFW-area sequence of "felt" earthquakes as well as the 11 "non-felt" earthquakes. Their study appears in the March issue of The Leading Edge, a publication of the Society of Exploration Geophysicists.

Let us hope that the Chinese geologists will conduct studies in Sichuan before starting extracting the gas, especially at a time when Beijing has decided to dam most of the Tibetan rivers, thereby creating another risk of earthquake.  Read my earlier posting on the subject. 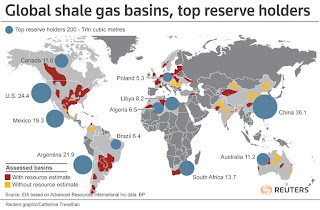 Sichuan's Gas Frontier
Reuters
April 21, 2011
Sichuan province is about four times the size of Pennsylvania, the US state which holds the huge Marcellus shale deposit.
Sichuan is where China's Song Dynasty people invented bamboo wells to drill for salt about 1,000 years ago. Today, the province pumps nearly a quarter of China's total natural gas production.
One of China's main rice-growing provinces, Sichuan has rich water sources, sitting at the upper reaches of China's longest river, the Yangtze. Access to water is key to shale development because fracking is so water-intensive.
"If there are any major breakthroughs, they should come from Sichuan," said Guo Tonglou , chief geologist of Sinopec South Exploration Company. "We've done lots of work in the basin."
Explorers have sunk wells over 7 kms deep and made major discoveries such as Puguang, a conventional gas reservoir with proven reserves of 400 billion cubic metres, one of the country's largest gas fields. Geologists believe shale deposits normally sit close to big conventional reservoirs.
Few at Chinese firms think money will be a problem once companies prove sizeable reserves can be tapped.
"Decisions on spending come really quick nowadays if you can convince management it's a good project," said Sinopec's Wei.
The rising cost of importing gas is imparting some urgency to those decisions.
China is set to secure nearly a third of its gas consumption through imports by 2020, much of it from costly sources such as gas piped from Turkmenistan and a string of long-term purchase agreements for liquefied natural gas (LNG) from Australia, Qatar and Indonesia. The price of the gas in those contracts is indexed to oil, making them relatively expensive when oil prices are high compared to other fuels.
A rapid rise in domestic gas reserves, boosted by shale development, would be likely to depress domestic prices and may make China think twice about those LNG deals.
PetroChina's Chief Financial Officer Zhou Mingchun said in March the company lost 3.7 billion yuan in marketing 4.3 bcm of imported gas last year, mostly from Central Asia, because domestic gas prices were capped lower than import costs.
Still, China faces huge development costs in bringing shale gas supplies online. It only has 49,000 kms of gas pipeline grids, barely a tenth of the US system, and would need to spend billions of dollars to build infrastructure to pump the gas to market.
Farmers such as Cui Jinlian, who is planting peas and eggplants by a conventional gas well near Yuanba county in Sichuan, say they've never heard of "shale gas" -- or had any idea it could contaminate the water they use for cooking and farming.
But Cui is aware the gas under their land has a poisonous component -- hydrogen sulphide (H2S)-- that can kill people. Gas pumped from the Sichuan basin, both conventional and unconventional, is mostly sour gas that contains H2S.
"It is no good for immediate use. The gas needs to be sent somewhere for processing first," said Cui in her musical Sichuan dialect, while resting by her small vegetable field. Piling up at the backyard of her simple one-story brick house were the dried tree twigs her family uses for cooking.
She knew also that hydrogen sulphide leaked from an explosion at a PetroChina exploration well in 2004 in Chongqing, killing hundreds of villagers in their sleep.
"Shale gas is a bit controversial, it can have a negative impact if done improperly," said Johnny Browaeys of CH2M, a US consulting firm providing environmental and engineering services with an office in Shanghai.
"It's something we need to do right from the very start," said Browaeys, a fluent mandarin speaker who once lived in western China. "You don't want to get into a reputation issue."
Posted by Claude Arpi at 6:47 AM