Where is Confucius gone? 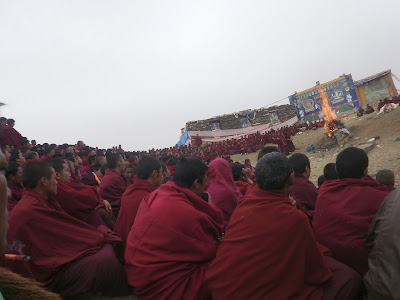 “China is the developing country with the strongest potential, but is still lagging behind the US, the EU and Japan in terms of soft power, including the maturity of economy, technology, education and culture. [China] is an important Asian player with global interests and impact, but is still unable to take a leadership role in the region. [China] is a socialist country with unique governing and value systems, but is experiencing deep reforms and awaiting territorial unification as well as threatened by national separatism and social unrest.”
Thus spoke Wang Jisi, the Dean of the School of International Studies in Beijing University, also a member of President Hu Jintao’s personal think tank. Wang’s message was clear: China will continue to stick to a ‘peaceful rise’. Wang, who expressed himself in the very official Global Times, even disapproved of some Chinese analysts who, in 2010, made provocative statements extending China's ‘core interests’ to the South China Sea.
Soon after Dr Manmohan Singh returned from his trip to the island of Hainan (to attend the Third Summit of BRICS nations,) Willy Lam, the veteran China watcher wrote in East-Asia-Intel.com: “Call it damage-control diplomacy. Since President Hu Jintao's American visit in January, Chinese diplomats and ‘official’ academics have been trying to reassure the world of Beijing's non-aggressive, ‘peaceful development’ diplomatic posture.”
The Indian press also noted a thaw and immediately rejoiced about the renewed possibility of the recurrent friendship between India and China.
But there is another side to the ‘peaceful’ coin.
When the 2010 Nobel Peace Prize was awarded to Liu Xiaobo, (he had initiated the Charter 08 which calls for the introduction of democratic reforms in China) Beijing went wild. It enraged Beijing so much that a Ministry of External Affairs spokesperson described the award as 'obscene'.
Though Lui’s demands were rather mild, he was jailed for daring to speak about ‘reforms’.
Since February, when the Arab world began to ask for ‘reforms’, Beijing started trembling. The regime became nervous. Already in late January, an article entitled Major Social Unrest Every Five Days in 2010 appeared, quoting a report published by the Shanghai Jiao Tong University on social unrest in China. It affirmed that in 2010, there has been a major incident of social unrest in the Middle Kingdom every five days. This represented a 20% increase over 2009. While 60 major incidents of social unrest were reported in 2009, it climbed to 72 in 2010: “Social unrest had spread throughout 29 provinces and cities (over 90%), with most occurring in Henan, Beijing, and Guangdong.”
The unexpected upheavals in Tunisia, Egypt and Libya did not amuse the leadership in Beijing. According to The People’s Daily, in February Wu Banguo, a member of the all-powerful Standing Committee Politburo of the CCP stated: “Based on China's national conditions, [we] solemnly declare that we will not engage in a multi-party political system or in diversity of the guiding ideology. We will not pursue the ‘separation of powers’ and the bicameral system, or engage in federalism or privatization of property.”
Beijing's response was extremely tough when an online campaign called for weekly rallies all around China. The Sydney Morning Herald reported that during one of these rallies: “Hundreds of uniformed and plainclothes police smothered Beijing's designated rally site on the Wangfujing shopping street, aggressively pushing away foreign reporters with cameras and briefly detaining several.”
Soon after meeting, Zhou Yongkang, the member in charge of national and public security confirmed that a national database containing basic information on the different strata of the population would soon be set up. He also announced that an early warning system will be put in place to alert the authorities in case of social grievances to diffuse possible incidents before they happen.
Then Ai Weiwei was arrested. The artist-activist is famous in China for having worked as the artistic consultant for the Beijing National Stadium for the 2008 Olympics. His mistake was probably to have questioned the government on corruption, particularly about the construction of Sichuan schools which collapsed during the 2008 Sichuan earthquake.
In China, many had thought that Weiwei was ‘untouchable’. But even when several foreign governments and human rights groups called for the artist's release, Beijing officials did not move, except to say that he was accused of ‘economic crimes’.
Nicholas Bequelin who works for Human Rights Watch believes that his arrest was calculated to send the message that no one would be immune, in Chinese terms, ‘you kill the chicken to scare the monkey’.
The green light for the operation probably came from the top leadership. The Guardian analyzed: “Chinese authorities have made their biggest move against dissidents and activists for years, including artist Ai Weiwei. The crackdown followed an anonymous online call for protests inspired by Middle Eastern uprisings, although it is unclear if any of those held or missing were connected to the appeal.”
We are far from the ‘peaceful rise’ trumpeted by Wang Jisi and other academics.
Wei Jingsheng, the exiled ‘father’ of the democratic movement in China commented: “ Since this happened to one of China's most well-known cultural figures, it has prompted many to remember the opening shots of the Cultural Revolution, when the Maoist regime removed ideologically inconvenient artists, writers and intellectuals from the scene at will without even any pretense to legal procedures”.
More ironically, a 31 foot-high statue of Confucius erected three months earlier with great pomp in front of the National Museum (formerly The Museum of the Revolution, but the word ‘revolution is taboo in China today) near the famous portrait of Mao on Tiananmen Square, was suddenly removed on April 22.
Where did the statue mysteriously go? Nobody seems to know. But as Wei Jingsheng wrote: “no one in China is safe from the whims and anxieties of those [officials] in power”. Not even Confucius, said a commentator.
Even more brutal.
On 16 March 2011, the self-immolation of Phuntsok, a Tibetan monk belonging to Ngaba Kirti Monastery in Sichuan province triggered violent protests by several thousand monks in Eastern Tibet. 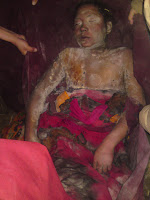 According to the Tibetan Center for Human Rights and Democracy: “Chinese security forces have cordoned the monastery and additional contingents of armed security forces (estimated to be around 800) have been brought in on 9 April 2011 to reinforce security clampdown in Ngaba County. The movement of the monks is totally restricted with no one being allowed to go in or come out of the monastery.”
Since then, more depressing news have circulated, particularly the increased presence of Chinese security forces in all Tibetan areas of Sichuan, Gansu and Yunnan.
According to other information, Chinese Communist cadres are roaming around villages “and talking about harmony and patriotism”.
After some 300 monks of Kirti monastery were trucked away by Chinese police to an unknown destination on April 21, some Tibetan prefectures of Eastern Tibet have been closed to foreign tourists. The latest reports affirm that the situation is extremely tense in the entire region.
The present leaders in Beijing may be less corrupt than the Qaddafis or the Mubaraks, but the repression of the ordinary people's aspirations is the same in China, in Libya or in Tunisia. Of course, the West is too scared of China and will not intervene or even condem the happenings there, but ultimately Beijing’s attitude does not lead to stability and peace and its recognition as a responsible power.
Posted by Claude Arpi at 5:31 AM