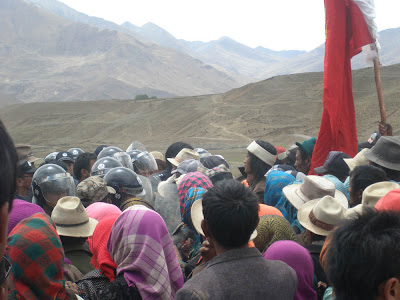 The Dalai Lama recently  said that China needs to learn from India about democracy. According to him, it has brought harmony among people of different languages and ethnic backgrounds: "In India, because of the rule of law, there is harmony in society, which has different languages and scripts.
Democracy in this country is very deeply rooted not because of the country's poor conditions, but because of transparency."
In an interview to The Nation, Thailand's leading English daily, he noted that the world trend was the rule of law, transparency, fairness, honesty and respect for human values and that "military occupation would not solve problems... People in China should learn from India's experience."
As this article, in the China Brief of the Jamestown Foundation explains huge amounts of money are 'invested' in implementing 'social management'.
The budget for 2011 is 624.4 billion yuan ($95.18 billion), 23.3 billion yuan ($3.55 billion) more than that of the PLA.
It is quite unbelievable.
And at the end, nothing is solved. Rule of law, transparency, fairness, honesty and respect for human values is far more sustainable (and cheaper).
Is China ready to learn from India? Probably not yet!
It raises another issue, what will happen if China does not earn these billions in foreign currency? After a short period of chaos, perhaps more harmony and democracy!
History of mankind has shown that you can suppress the aspirations of the masses for sometime, but not forever.