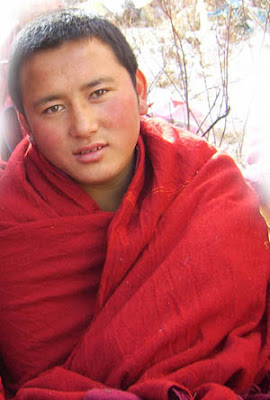 When one reads this press release from the Tibetan Centre for Human Rights and Democracy, one understands that the present leadership in China is as ruthless, brutal, (though better organized) than the Ben Alis, Gaddafis or Gbagbos.
Further, the Chinese State is extremely good at propaganda.
A few days ago, Beijing asked “the US to Stop Being a Self-styled 'Human Rights Preacher'.
It is always a good tactical move to try to defame the opponent on one’s weakness.
After the release by the US State Department's 2010 Annual Human Rights Report on April 8, the Chinese Foreign Ministry Spokesman, Hong Lei declared: “The U.S. should reflect more on its own human rights issues, stop acting like a ‘Human Rights Preacher,’ and stop using its Human Rights Report to interfere in the domestic affairs of other countries.”
Hong also praised the Chinese government’s protection of human rights.
The Chinese publication Huanqiu published a response to the Western countries' criticism of China's arrest of artist Ai Weiwei.
According to the author: "the Western media is using their own logic to interpret the facts and try to influence China. ...It is precisely the West's approach that breaches the basic spirit of the law in a serious confrontation, and that tries to portray Ai Weiwei a legally ‘sacred and inviolable’ democracy fighter.”
The recent happenings in the Arab world make China even more nervous.
The Huanqiu article says: “Since the ‘Middle East revolution,’ the US and European countries haven't been able to put a brake on pointing fingers and interfering in other countries’ internal affairs. The interference in Ai Weiwei’s case is a total negation of China’s law. It is no different from a group of Westerners assembling to burn down China’s Supreme Court building.”
And the author continues: “Chinese law is the skeleton of this country; the Western attempt to influence the trial of Ai Weiwei is like installing a remote control for the skeleton. With the control in their hands, they are making China a large and obedient puppet.”
It is difficult to force China to be an obedient puppet; the Middle Kingdom is too big for that.
It remains that Beijing is nervous.
It is ironical that next month (on May 23), China will celebrates the 60th anniversary of the ‘Liberation’ of Tibet.
In 1951, the Tibetans were forced to sign the Agreement on Measures for the Peaceful Liberation of Tibet.
But ‘liberation from what’, as once Nehru asked the Indian Parliament.


Chinese armed police cordon Ngaba Kirti Monastery, 2500 monks face food shortage
TCHRD Press Release
11 April 2011,
Dharamsala
Since the self-immolation of Phuntsok on 16 March 2011 at Ngaba County, Sichuan, coinciding with third anniversary of the 2008 uprising in Tibet and to protest against continued repression by Chinese authorities in Tibet, the situation has aggravated at Ngaba Kirti Monastery – the monastery to which Phuntsok was affiliated.  According to latest confirmed information, Chinese security forces have cordoned the monastery and additional contingents of armed security forces (estimated to be around 800) have been brought in on 9 April 2011 to reinforce security clampdown in Ngaba County. The movement of the monks is totally restricted with no one being allowed to go in or come out of the monastery. Gaps in boundary barb wire in north of the monastery have been closed with concrete walls.  Since the cordon, monks are facing shortage of food and depend on voluntary food offerings by locals through the monastery administration. Authorities have prohibited the faithful local Tibetans from offering food to monks. Reports from ground indicate that if the situation remains same, over 2500 monks in the monastery will face starvation which will most probably lead to a mass revolt. In such an event security forces will unleash its deadly assault leading to extrajudicial killings as it happened three years ago on 16 March 2008 in Ngaba County. The lamas and monastery officials have been able to
maintain peace so far by advising the monks to remain calm despite the ongoing repression.
In the aftermath of Phuntsok’s protest and subsequent show of solidarity by monks of Kirti Monastery, the authorities have taken drastic measures to bring the monks under control. According to latest information, since the begining of April 2011, security forces who were earlier surrounding the monastery have entered into the campus. They have stopped elderly monks from even walking the outer circumambulation path (Kora), and made observation posts (with binoculars) on stepped platforms of stupas in the monastery. The guards keep round the clock vigilance of activities in the monastery. Over 33 people have been arrested out of which 22 people (8 monks and 16 lay people) continue to be under detention.
The Tibetan Centre for Human Rights and Democracy (TCHRD) appeals to the international community and the United Nations mandates on human rights to urgently issue their intervention in order to stop the ongoing security clamp down and arbitrary arrests and detentions of Tibetans and the overall deplorable human rights situation in Ngaba County. The Centre urges the authorities to immediately stop the gross human rights violation of denying food to monks of Kirti Monastery and to ease restrictions on movement.
Factsheet about the situation in Kirti Monastery and Ngaba County (documented till 11 April 2011)

Background
A young Tibetan monk, Phuntsok, self-immolated in Ngaba County, Sichuan, on 16 March 2011 and died in a hospital early next morning. His act was timed to coincide with the third anniversary of spring 2008 uprising in Tibet to protest against the Chinese rule in Tibet.
When Phuntsok was on fire the police doused the flame and began beating him severely. Local Tibetan bystanders rushed to the scene to protect the monk and took him to his monastery – Kirti Monastery.  When he was later taken to a hospital, the authorities demanded police clearance for treatment. The monk succumbed to burn injuries the next day around 3 am (local time) on 17 March.
Around a thousand Tibetans gathered in the market and staged a protest against police and the authorities. The People’s Armed Police and officers from other security agencies brutally broke the peaceful rally. Several Tibetans were detained from the crowd.
Posted by Claude Arpi at 6:57 AM