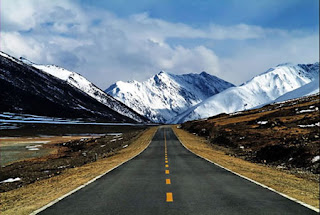 Should not India be a bit worried by the frantic pace of construction of new roads on the Roof of the World?


2009 cited as most significant year in road building work in Tibet
(TibetanReview.net, Dec 29, 2009)
China has so far invested 6.062 billion yuan to build 53,000 km of highway in Tibet Autonomous Region (TAR), connecting 67% of its counties with asphalt roads, reported China’s online Tibet news serviced eng.tibet.cn Dec 27, citing sources from TAR Communication and Transportation Office.
The report quoted Zhao Shijun, director of TAR Communication and Transportation Office as saying:" This year (ie, 2009) is the most significant year of highway constructions with 19 key projects being completed, and stimulating economic growth by 1.2 percentage points."
The projects were reported to have enabled the achievement of the goal of completing three vertical and three horizontal supportive highway lines to connect Sichuan, Yunnan from east, Xinjiang in west, Qinghai in north, and India, Nepal in south.
Posted by Claude Arpi at 6:01 AM