Two Spy Satellites in one Week! 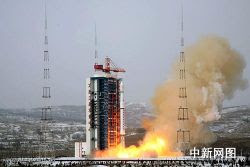 The Chinese military space program is going on full swing. The launch of these two satellites has been reported in the Chinese press. The information here is quoted from http://www.china-defense-mashup.com.


Crazy! China launches two Spy Satellites in seven days
December. 13 (China Military News cited from Xinhuanet) — China will launch a remote-sensing satellite, ” Yaogan VIII” in the coming days from the Taiyuan Satellite Launch Center in northern Shanxi Province, the center said Sunday.
The satellite would be sent into the space aboard a Long March 4C carrier rocket, the center said.
Also on board is China’s first public-welfare mini satellite, “Hope I,” which will be used for the country’s young people to experience aerospace science and technology.
Currently, the satellites and the rocket are in good condition, according to the center.
Its predecessor, “Yaogan VII,” was launched Wednesday from the Jiuquan Satellite Launch Center in northwestern Gansu Province.
Posted by Claude Arpi at 11:42 AM