The Negotiations that will never be? 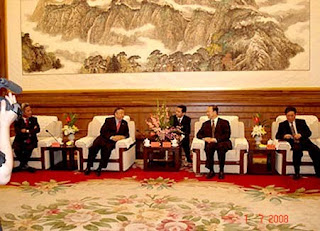 This statement of  Zhu Weiqun, Vice Minister of the United Front Work Department is  depressing at first sight; it however probably signals a return to the negotiating table.
The Chinese are also adepts of the Middle Path approach, but they prefer to change the posts before the beginning of the talks: the further the posts, closer to their position is the 'middle'.

One of the most shocking fact about the 'negotiations' is that the Chinese side does not even allow the Tibetans to have a Chinese-speaking member in their team.
The Chinese officials speak of 'lies', but their own is the biggest: they pretend that there never was an 'invasion' of Tibet and Tibet was just 'liberated'. According to the latest news from Eastern Tibet (Nyagchuka County, Kardze Tibetan Autonomous Prefecture, Sichuan Province), it is clear that Tibet is still not liberated.
Lodi Gyari's answer to Zhu is available on Phayul.com.


Top negotiator claims Dalai Lama lies
Global Times
December 08 2009
By Xie Rongbin and Duan Congcong
In an exclusive interview with the Global Times, Zhu Weiqun, vice minister of the United Front Work Department (UFWD) of the CPC Central Committee, dismissed recent remarks by the Dalai Lama that China is aware that he is not seeking an independent Tibet.
"This is yet another lie from the Dalai Lama," Zhu told reporters Monday. "I represent the government during talks with his man. It is impossible for me, or anyone from my team, to say something like ‘the Dalai Lama has stopped separatist activities.'"
During a visit to Australia earlier this month, the Dalai Lama said in Sydney that, during the fifth-round of talks in 2006, officials from the UFWD had told his representative, Lodi Gyari, that they knew the Dalai Lama hadn't sought an independent Tibet, according to Voice of Tibet Radio.
Thus, any comments since then by the Chinese government condemning his separat-ist acts were pure political propaganda, the radio reported.
"During the talks with Gyari, he did tell me that the Dalai Lama had no intention of seeking independence and was willing to solve the issue under the Chinese Constitution," Zhu said. "What he said was good, but still far from enough. The ‘middle way' solution the Dalai Lama proposed still claims Tibet as occupied by China and demands the abolishment of the current social system. His so-called ‘greater Tibet' idea also demands the pull-out of all non-Tibetans and military from Tibetan-inhabited areas."
"Those ideas all oppose the Chinese constitution and the Law on Regional National Autonomy. He should seriously rethink his ‘middle way' plan and make thorough explana-tions," Zhu said, adding that this is not the first time the Dalai Lama has spoken such lies.
"He made similar remarks last April in Seattle. Shortly after that, Gyari told me in Shenzhen that the Dalai Lama misinterpreted my words in 2006. I asked him to warn the Dalai Lama about repeating such mistakes. However, the same thing happened again in May and June that year and in August this year. I wouldn't be surprised if he brings up the same lie again in the future," he said.
Zhu also pointed out that, no matter how the Dalai Lama repeats the lies, Gyari has always remained silent in the corner, which may reflect the dilemma of Gyari: while refusing perjury in favor of the Dalai Lama, he is either reluctant or unable to correct his master.
Given the fact that each meeting with Gyari is tape recorded, Zhu encouraged Gyari to tell the truth.
As to the Dalai Lama's motives for the lies, Zhu said he might be trying to provide himself with an exit amid the political mess.
By allegedly masterminding the March 14 riots in Lhasa last year, the Dalai Lama had intended to hijack the Beijing Olympics to broker talks with Beijing to achieve a breakthrough on independence, "but only in vain," Zhu said.
Shortly after the riots, the Dalai Lama called the slaying of innocent citizens a "peaceful demonstration" and denied his demands for the withdrawal of the military and non-Tibetans. He never admitted his lies even after being exposed, Zhu added.
Posted by Claude Arpi at 11:57 AM

Email ThisBlogThis!Share to TwitterShare to FacebookShare to Pinterest
Labels: Negotiations