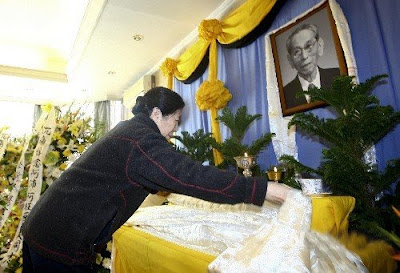 Last posting about Ngapo.
A few years back, I had written a long paper about the 17-Point Agreement.  Here is an extract which shows that Ngapo was ashamed of his tibetanness.
When he arrived in Beijing, he refused to used a khata and cut his hair . Ironically, Beijing has  last week organized a function for people to offer khatas to the picture of Ngapo.


The Delegation to Beijing
At the end of the discussions in Yatung [where the Dalai Lama had taken refuge near the Indian border] , it was decided to send a delegation to Beijing to discuss the status of Tibet with the Communist leaders. A ten-point proposal was prepared as the basis on which the delegates were to negotiate.
A cable from Henderson [the US Ambassador] explains the state of mind of certain Tibetan officials: “…because Tibet had received no response from the United Nations and some of its member states with respect to its appeal regarding Communist China’s invasion of Tibet in October 1950, the Tibetan authorities had fallen into a dejected and fatalistic frame of mind and appeared to be convinced that they would have to accede to the demands of Communist China regarding Tibet.”
However, the Dalai Lama did not give his representatives any plenipotentiary powers. They were asked to refer any important decision back to the Kashag in the Chumbi Valley and were also requested to establish a wireless link between Yatung and Beijing to keep a daily contact. Unfortunately this was not to happen.
In late March, the different parts of the team began to proceed to Beijing. From Yatung, Kheme Dzaza [who had led the Congratulation Mission to India in 1946]  and Lhautara, a monk official sailed from Calcutta to Beijing soon after Surkhang’s return  from Delhi.
Two delegates left Lhasa for China via Chamdo to pick up Ngabo Ngawang Jigme, who had just been released after a short period of indoctrination. He was now Vice-Chairman of the ‘Chamdo Liberation Committee’. While prisoner in Chamdo, he is supposed to have told the Chinese: “We have been defeated and we are now your prisoners. Whether you keep me under arrest or not, my hope was that we could have a good negotiation and a peaceful settlement. That’s all I can say.”
At the same the Chinese troops began their propaganda: “With serious concern for the people of Tibet, who have suffered long years of oppression under American and British imperialists and Chiang Kai-shek's reactionary Government, Chairman Mao Tse-tung of the Central People's Government and Commander in Chief Chu Te of the People's Liberation Army ordered the People's Liberation Army troops to enter Tibet for the purpose of assisting the Tibetan people to free themselves from oppression forever.
All the Tibetan people, including all lamas, should now create a solid unity to give the People's Liberation Army adequate assistance in ridding Tibet of imperialist influence and in establishing a regional self government for the Tibetan people.”
The fact that Ngabo had been in the hands of the Chinese for the past five months should have disqualified him automatically to be part of the team. It has not been explained why the Tibetan Kashag selected Ngabo to lead such tricky negotiations knowing that he had been under indoctrination by the Chinese.
At the end of April, Zhou Enlai, the Chinese Prime Minister went himself to receive Ngabo and the Lhasa delegates at the Beijing station.
Ngabo did not follow the Tibetan tradition of presenting scarves to the Chinese leaders, he most probably felt ashamed of this old custom. He had cut his long hair to show the Chinese revolutionaries that he was a modern leader. This must have immensely pleased the Communist Government to see that at least one of the [Tibetan] delegates had rejected the ‘olds’ [Old Customs, Old Culture, Old Habits, and Old Ideas].
Posted by Claude Arpi at 5:27 AM