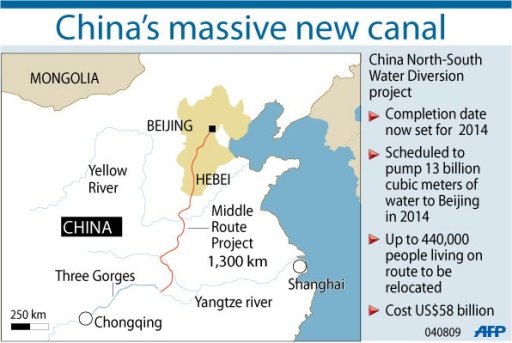 Gigantic projects have never afraid the Emperors in China.Is this 'Central Diversion' one more step towards the Diversion of the Brahmaputra?
Only the future will tell, but the plans are certainly ready. At the end, it will only be a political decision. Is Beijing ready to risk a war with India? Perhaps not immediately. Another factor is related to my yesterday's posting, many rivers are drying up in Tibet. Will Tibet have enough water in 2 or 3 decades?


China to resettle at least 440,000 for water project: report
Beijing (AFP) Dec 9, 2009
China will resettle at least 440,000 people to make way for a massive and much-delayed project aimed at diverting water to meet growing demand in the parched north, state media said Wednesday.
Authorities will move around 100,000 residents a year to allow construction of the South-to-North Water Diversion project, the Beijing News said, which aims to divert water from a tributary of the Yangtze river to northern China.
The project, long criticised by environmentalists for its huge costs, will include a three-line system of canals and pipes.
According to the report, the relocation of the 440,000 people is only related to the first construction phase of the eastern and central lines of the project. A western line is also planned.
Water was originally due to begin flowing from the central line to Beijing by 2010 but was postponed to 2014 largely due to the resettlement issue, media reports have said.
The delay will further complicate water shortages in northern China that experts blame on global warming, drought, and rising demand in the booming Beijing region.
Currently water is being diverted from parched Hebei province to provide emergencies supplies for neighbouring Beijing.
According to the report, the government will provide each resettled resident with 19,000 yuan (2,800 dollars) -- a sum that does not include compensation for the houses they will leave behind.
Posted by Claude Arpi