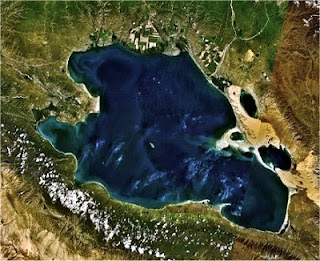 Very sad news for the end of the year. And why are they drying up if there is an increase in precipitation?
Strange!

Half of rivers flowing into Qinghai Lake dry up
Xinhua December 07, 2009
Half of the rivers emptying into the Qinghai [Kokonor] Lake, northwest China's Qinghai Province, have dried up, according to a survey completed recently.
The Qinghai Lake, known as China's ecological shield, serves as an important climate adjustor on the Qinghai-Tibet Plateau.
The Administration of the Qinghai Lake Nature Reserve and the Nanjing Institute of Geography and Limnology of the Chinese Academy of Sciences conducted a survey last year on the water depth and water quality of the Qinghai Lake.
According to the researchers, 127 rivers flow into the lake, 57 of which have dried up.
Rivers surrounding the Qinghai Lake serve as the major water source supplies to the lake. Despite half of the dried-up rivers, the lake's water level has been rising in recent years.
Data show that the water level has been rising for five straight years, up 54 cm from 2005 to 2008, and is expected to rise by 10 cm this year.
Experts believe that the water level rise is attributed largely to the increasing precipitation in the Qinghai Lake area in recent years.
The survey shows that the annual flow of the Buha River, the largest river flowing into the Qinghai Lake, is 703 million cubic meters.
Posted by Claude Arpi at 11:54 AM