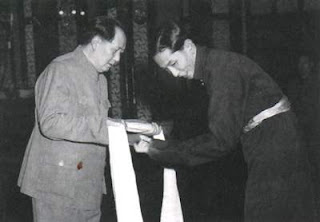 
As Dharamsala mourns the death of Ngapo Ngawang Jigme, one could ask, what is the need?
He has always been on the wrong side of History. We mentioned the signature of the 17-Point Agreement (without referring to the Dalai Lama or the Lhasa government) in an earlier posting, here is an extracts of my book Tibet: the Lost Frontier showing his attitude during the Chinese 'liberation' campaign of October 1950 which was ambiguous, to say the least.

It's very sad. More and more witnesses give us the whole picture of the invasion...

So, it was not only the fault of Ngabo, even the autocratic Aristocrats in Lhasa were equally responsible! for the old Tibet poor situation!